Warning: "continue" targeting switch is equivalent to "break". Did you mean to use "continue 2"? in /nfs/c05/h05/mnt/159427/domains/leidenmagazine.com.au/html/wp-content/plugins/essential-grid/includes/item-skin.class.php on line 1041
 Everyone Has a Story...and Social Media Only Tells Half It

I don’t usually engage in social media banter when someone posts about struggling with losing weight and wanting to get fit. I usually read a few of the comments then move on with my life. But on the weekend I came across a post which caught my eye. I was working out at the time, and in between exercises I usually hop on Facebook to have a quick look at what’s going on. I came across a post from a young girl who posted on a local group. 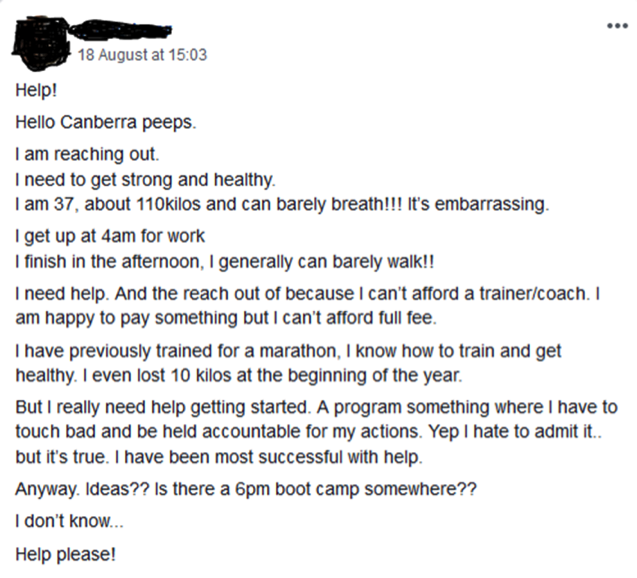 I must have seen the post around an hour after it was put up and there were already around thirty comments. What struck me the most was the range of responses people put up which included suggestions of different gyms to try, their own personal stories, suggestions on what exercise she could try and the usual diet recommendation comments. As you could imagine it was the diet comments I paid most attention to. I couldn’t help but notice there were a few comments recommending the keto diet, so I thought it would be a good idea to put my two cents worth into the discussion. I posted three simple words… don’t do keto!

With that I finished my work out and thought to myself, that was that. Well it turns out it wasn’t. Within ten minutes I already had five replies from people questioning my stand. Nothing aggressive, just people stating that it works for them and why my position was different to the status quo of the other posts. Nine times out of ten people will tell you how great something is rather than be seen as a failure and say it didn’t work. I replied with the below comment.

After I posted this comment I sent the women who made the post a PM and asked her a few more questions about her past history. Now I’m not going to go into much detail but what I found out was she had a troubled upbringing, a history of binge eating and using a food as a reward. She labelled herself as lazy and referred to dieting as a means of achieving her weight loss goals. From this chat it was easy to see the dieting and weight loss were not the primary reason for the way she felt, it was more secondary. Her history of an upbringing in a dysfunctional family where mental illness and alcoholism was present and food was a reward but also a way of coping are the primary drivers of her behaviour.

Unfortunately diet culture instills this attitude that if we need to lose weight then the only way to do it through following a diet. Time and time again research has shown people who go on restrictive diets will put the weight back on and then some more. The restrictive nature of most diets include the removal of entire food groups. When people starting craving these foods, they finally succumb to the natural drive to eat these foods but then feel guilt and shame as a result. In extreme cases people binge eat. This further feeds the stress and anxiety because people feel out of control and this then leads to further binge style behaviour.

There were a range of diets recommended in this post so I decided to take a look at them online and it was not surprising; they were very restrictive but also made some ridiculous claims on the benefits of the diets. This included a post pregnancy weight loss program prescribing a twenty-eight day diet and exercise plan eating 1400–1500 calories a day, a vegan eating plan, a gut and psychology syndrome diet and the most ridiculous was the diet which claimed to balance your hormones, detox, teach your body to lose weight, rest and repair the gut through mono-eating (whatever that is) and only eating protein and vegetables.

I think most people’s comments were genuine and sincere and really wanted to help her. What I saw was a vulnerable person who was reaching out in a time of pain. Her post only told one side of her story and I believe that sometimes the suggestions and recommendations we make can only make things worse. Social media has plenty of benefits but it also can also be vicious and stressful for some. Sometimes the best advice is to offer encouragement and support.