Warning: "continue" targeting switch is equivalent to "break". Did you mean to use "continue 2"? in /nfs/c05/h05/mnt/159427/domains/leidenmagazine.com.au/html/wp-content/plugins/essential-grid/includes/item-skin.class.php on line 1041
 Leiden Book Club - Fight Club Review 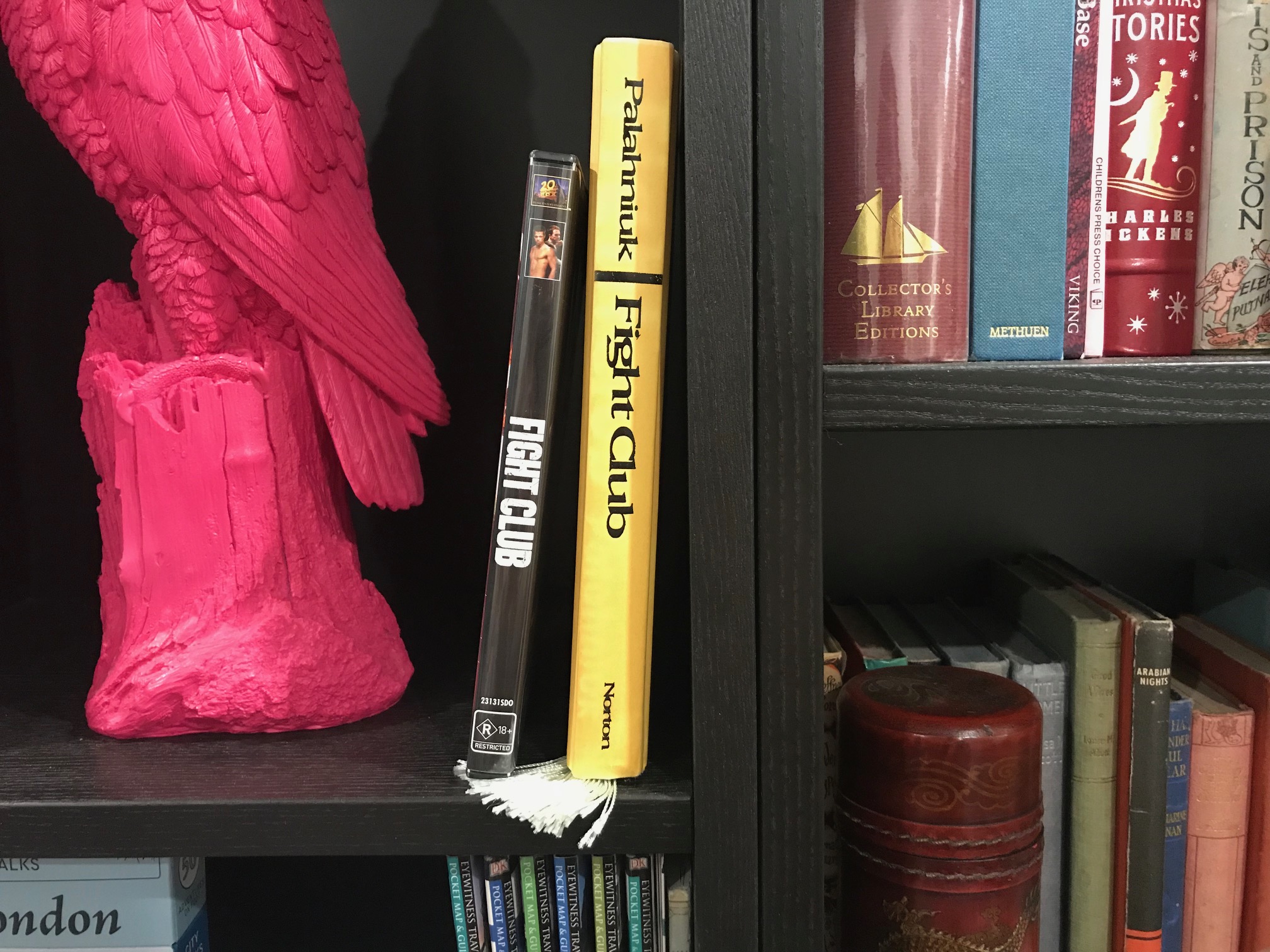 It’s a been a long time since I last read Chuck Palahniuk’s debut novel Fight Club. I was around fourteen–fifteen when I first picked it up, a result of having become enamoured with its much more famous film adaptation (more on that later). I remember, back then, being struck by the blunt beauty of the prose, wrapped around a tight and thrilling narrative.

It wasn’t long after that I chronologically consumed the entirety of Palahniuk’s catalogue, which at that point ended with Haunted. Throughout this consumption I became more and more dissatisfied, seeing less insight, less poetry and more shock-value. Years passed and I moved out my Palahniuk phase, relegating his works to simple teenage memory.

But the memory of Fight Club has never truly faded; and I have continued to hold in high regard despite, as of this month, having only read it twice. So it was with some glee that I pulled my copy down from the shelf and paid visit to an old friend.

Fight Club is the story of unnamed narrator (who later appropriates the alias Joe), a frustrated, white collar worker bee who has been suffering from a serious case insomnia for quite some time. His efforts to cure his insomnia introduce him to two very different reflections of himself: Marla Singer, a deranged woman obsessed with death, whom the narrator meets thanks to their shared love of playing tourist at support groups for the terminally ill; and Tyler Durden, a charismatic vagrant with a grudge against modern society, whose acquaintance the narrator makes when he spies Tyler creating art on a nude beach. Through his interactions with Marla and Tyler, the narrator tears himself away from the comfortable emptiness of his former life, and casts himself headfirst into the infinite possibility of the abyss.

Gazing into Fight Club again, I find that an older perspective has not tarnished the novel’s angst-ridden spirit, but rather has brought out a deeper sheen than I was first able to perceive so many years ago. Where once I simply saw ‘good style’ I now see a lyrical cascade, bearing closer resemblance to poetry than prose. Palahniuk’s voice is jaded in the most wonderful way; and his message is dripping with menace, one that is directed inward just as much as it is out.

Where before I found an exciting thriller I now see a sombre lament, told not with tight pacing but with hypnotic train of thought. Fight Club’s reputation often precedes it and, as I have found, so too does its surface content. It’s easy to get caught up in the visceral darkness the novel puts forth; but after a second, closer glance, you’ll find a surprisingly gentle work about human desire for connection.

Now, let’s briefly touch on its adaptation. Fight Club the movie has overshadowed its parent enormously, and not entirely without good reason. David Fincher (director) clearly has a deep respect for the source material, directing many scenes almost exactly as they appear in the novel. Points of difference are handled elegantly as well. Where scenes from the novel have been cut, their essence has been elegantly combined with remaining scenes, the end result being that nothing feels like it’s truly missing.

Problems arise mostly from the casting. I don’t buy Edward Norton as the Narrator: he manages to capture the Narrator’s sullen tones, but fails to really express his more manic moments. Brad Pitt manages to pull out a good performance and while my imagining of Tyler has less overt sex appeal than Pitt’s performance puts out, I cannot deny the portrayal is iconic. Helena Bonham Carter, on the other hand, is the spitting image of Marla, playing her with just the right combination of sass and self-loathing. All in all, Fight Club the movie is a splendid adaptation that deserves most of its reputation, though the book is still better (the ending too).

Next up is ‘Watership Down‘ by Richard Adams