Warning: "continue" targeting switch is equivalent to "break". Did you mean to use "continue 2"? in /nfs/c05/h05/mnt/159427/domains/leidenmagazine.com.au/html/wp-content/plugins/essential-grid/includes/item-skin.class.php on line 1041
 Leiden Recaps: Bachelor in Paradise Australia Finale Recap

It feels like only yesterday that I was cursing myself for agreeing to view every episode of the Bachelor in Paradise. And now that we have reached the grand finale, I can safely say my initial reluctance was entirely justified; but, nevertheless, here we are at the finish line. And what a race it’s been: hearts have been broken, friendships crumbled into dust, cheese scoffed down by the wheel and all for this moment. Get ready for the epic finale that is episode sixteen.

We open with the gruesome visage of Osher breaking down the mechanics of the finale: instead of a rose ceremony, we’re doing a ring ceremony; he then goes on the helpfully explain what rings are. From here we move on to yet another flashback reminding us who all the couples are.

The action truly begins as Sam and Tara wake up the morning after the previous episode’s date. Sam babbles about feeling both fearful and excited by the idea of commitment while Tara is simply excited to ‘get it over with and get out of here’.

Grant and Ali take a dip in the pool to reflect on their relationship thus far. Grant tells Ali he’s never felt this way before, despite the fact that he has attempted to marry two other women. Ali has come around completely since last episode and is now fanatically devoted to the idea of moving to L.A.

Keira continues to fish for the ‘I love you’ from Jarrod, this time by voicing vague fears of heart-break. Jarrod, carefully reading the situation, assures her that she is beautiful and kisses her into submission. Keira fails to get the declaration of love yet again but doesn’t seem to mind terribly.

Jake has ‘quickly fallen in love’ with Megan and cannot stop thinking about how to make the commitment work. Megan, however, is very clearly ready to jump off the Jake train, having gone from ‘80% maybe’ to ‘100% maybe’. She decides they’re not ready for commitment just yet and elects to bail on the commitment ceremony. Jake, aware that he cannot build a relationship without the aid of producers, silently throws in the towel and sees Megan off, putting an end to the inane saga once and for all.

An indeterminate amount of time passes and Jarrod suits up for the ceremony. Unfortunately, he must first justify his love to Osher before he can move on to happiness. He passes the test and goes on to declare his love once and for all to Keira, who walks in shortly afterwards. Jarrod takes her hands and notes that ‘being together and fighting is better than not fighting at all’.

He drones on for a few more minutes before finally confessing his love to a weeping Keira, who thanks him for his love before launching into an agonisingly long speech of her own. Keira decides she loves Jarrod as well and the two exchange promise rings, which Jarrod swears will eventually become engagement rings, should the vineyard ever turn a profit.

We move on to more of the same as Grant and Ali get ready for their turn on the gallows. Ali swings by Osher’s hut to have an extremely awkward conversation with a possibly pre-recorded Osher. With that out of the way, Ali moves on to await Grant, and the gigantic wedding ring he’s bringing with him. Grant arrives on the scene to outdo Jarrod by giving a longer, duller speech. Eventually he offers Ali, not the wedding rings she’s expecting, but a simple promise ring. Ali swallows her disappointment and accepts the ring, trying with all her might to remain in love.

Finally, we come to Sam and Tara. Tara puts on costume jewellery while Sam gazes thoughtfully at the branding on his ring box. We cringe through one final confrontation with Osher before Sam takes his place on the commitment mat. Tara waltzes in and launches into her own share of speeches, in which she equates laughter with love, disowns her best friends and jams a fifth ring onto Sam’s finger.

Sam retorts with his own brand of droning before dropping to one knee and popping the big question to an ecstatic Tara. Orchestral music swells as the pair walk off into the sunset and we learn the fate’s of the couples. Keira and Jarrod remain together on Jarrod’s vineyard, Sam and Tara are still engaged and Ali has escaped the orbit of Grant’s head. She hasn’t given up on love, however, and is announced as the next Bachelorette — OMG.

Thus ends the Bachelor in Paradise, not with a bang, not even with a whimper, but with a deflated sigh akin to the sound an old balloon makes when angry children have left the party long ago. It was a long and hard journey, ladies and gentlemen; and while I have walked away from the experience having gained nothing; it is my sincere hope that these sleepy jibes of mine have helped you walk away with a smile or two. 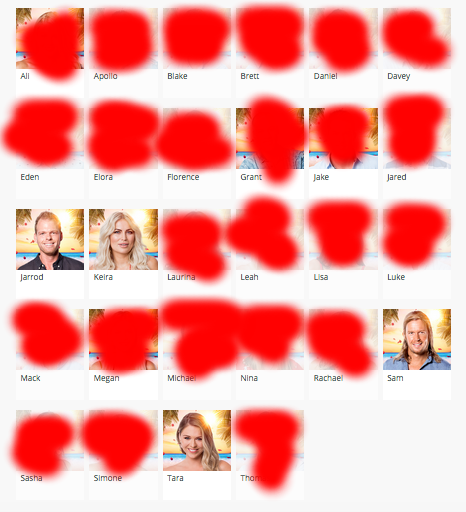