This is it, ladies and gentlemen, or very nearly almost it: the penultimate Bachelor in Paradise. So down some stay alert capsules and strap yourselves in for the semi-thrilling semi-conclusion that is episode fifteen. Fair warning on this one: the vast majority of it is flashbacks so you’re probably better off re-reading the old recaps instead.

We open with Jarrod and Keira moseying down towards the sea shore. What looks like ritual suicide is revealed to be the final date: a ride on a yacht full of champagne and cheese. They reflect on the tumultuous series of events that led to this moment, which begins a series of flashbacks in which Keira confirms that Jarrod’s eyes are indeed green.

They hop on the yacht and Keira bursts into endless laughter at Jarrod’s flimsy attempts to uncork a bottle. At this point Jarrod appears to have his oxygen supply cut off as he turns a truly magnificent, albeit unhealthy, shade of purple. The day comes to a close and Keira is already having doubts. She needs to make sure he’s ‘real’ by asking him cliché questions about the future. They both dance around saying I love you while desperately trying to coax it out of the other and while nothing comes out by the end of the date, they still seem on good enough terms. Jarrod tells her the night doesn’t have to end and they walk off to what will no doubt be a very disappointing three seconds.

Next up, Ali and Grant take bike ride on some old train tracks, sadly without a train in sight. As they race through Paradise at 25kmh Grant inelegantly tries to use the date as a symbol for the pace of their relationship thus far. Some more flashbacks speed by at 1kmh. They then discuss the elephant in the room – with the cameras, not with each other – that is the half-globe of distance between their home towns. They briefly stop to visit a cluster of children, where they demonstrate to each other what wonderful parents they could be.

Grant’s ready to marry her after this display, but only if she’s willing to move to L.A. Ali loves him but she’s ‘got really good friends’ and seems reluctant to give up her life for a man she met a week ago. Grant tries to reassure her by reminding her that ‘she’ll never be alone’ if she moves with him, whatever that means. Ali puts up a thin veneer of enthusiasm and claims to be ready to give up the life she was so attached to three seconds ago. The evening ends and they kiss and part ways, with Grant voicing doubts the second Ali leaves the room.

Sam and Tara traipse through the forest while triumphant music plays and Sam says… something about love. The flashbacks start up again and we are reminded that Tara has quite a low opinion of Sam and that Sam is very much deserving of that. The date transforms into a cooking lesson where Tara and an impatient chef tolerate Sam’s inability to cut an onion.

The sun goes down and Sam’s mood descends with it. Sam reveals that he’s afraid of commitment and, actually, is much happier on his own. He goes on to somehow make the phrase ‘I want you in my life’ come off as vaguely insulting; but the triumphant music kicks up again and he declares that yes, he is in love. Tara foolishly reciprocates the declaration of love and the two share a kiss before the date come to a close.

The producers have either run out of ideas or money at this point as the Jake and Megan date is really just the Keira Jarrod date all over again. They kiss repeatedly and Jake mirrors Keira by declaring that the relationship is ‘real’. They jump in the ocean and Megan makes the profound insight that Jake isn’t the intellectual type.

Evening rapidly falls and Megan reveals the true depth of her reservations to Jake. She feels Jake is a party animal and will not be able to settle down; and what’s the point anyway if he can’t commit? Jake cuts through these doubts by vacuously reminding her that she’s ‘real’ and that things will work out because he’s never felt this way before. Megan softens enough to become ‘90% maybe, 10% no’, which seems to be good enough as they both end the date in reasonably high spirits.

Thus ends episode fifteen, with so little build up that I cannot even fathom how far down the hole of quality the finale is going to take us. Fortunately, we don’t have to wait too long as things will finally be wrapped up in a neat little package tomorrow night. Stay tuned, ladies and gentlemen, the countdown has begun. 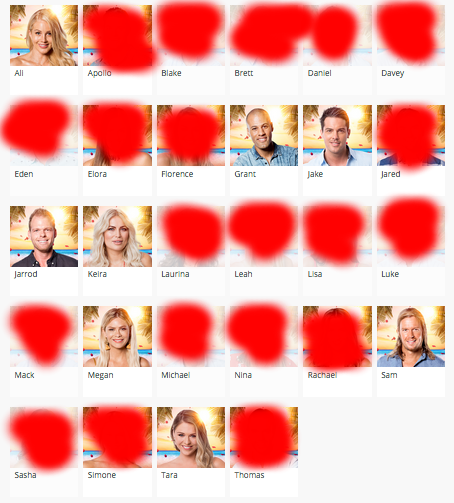