Warning: "continue" targeting switch is equivalent to "break". Did you mean to use "continue 2"? in /nfs/c05/h05/mnt/159427/domains/leidenmagazine.com.au/html/wp-content/plugins/essential-grid/includes/item-skin.class.php on line 1041
 Bachelor in Paradise Australia Recap Episode Twelve

Welcome back, ladies and gentlemen, to our ongoing series of essays dissecting the hidden meaning behind paradise. We’re at episode twelve now and I am starting to feel my sanity slip from gazing too long into the abyss. But I continue to march on, heroically saving you from having to see the things I’ve seen. Read on, if you dare.

Jake is confused as usual, this time by the re-arrival of Thomas. He puts up the flimsiest show of confidence the world has ever seen before attempting to run off into the darkness forever. Megan manages to chase him down for a chat which does not go well. Jake stares at the ground after sullenly dropping the bombshell that he ‘cares’ (which is apparently new to him) while Megan gradually sobs her way into incoherence.

Meanwhile, Leah is upset that American Jared has found someone who genuinely likes him and decides to leave Paradise. Keira tells her to shut up.

The next day, Thomas is head over heels for Megan, most likely because she’s the only woman on the island that hasn’t retched in his presence. Jake and Megan discuss their troubles again, with more success this time around. Jake is able to spit out something a little more meaty than ‘I care’, which moves Megan enough to confess the regrettable kiss with Thomas and to renounce him forever. The pair share a middling kiss as they move ‘into a new dimension’.

Thomas, who is starting to bear a strong resemblance to Keanu Reeves (Michael), is celebrating his triumph over Jake by asserting that he will give his rose to Megan in the next rose ceremony. Megan waltzes in with impeccable timing to rain all over this sad parade. She takes Thomas for a stroll in search of a good spot to bury him and quickly pulls the trigger. Thomas repeats the words ‘deep connection’ over and over in an un-poetic attempt to chain Megan to his sinking ship. Megan digs her heels in and rejects this new idiot in favour of her original idiot.

Meanwhile, Leah is still upset and decides to leave Paradise again. Keira tells her to shut up again.

Today’s date card goes to Rachael, who locks in American Jared in without a second thought. The pair hop on a boat and set sail for a small island filled with large men wielding larger clubs. The tantalising prospect of an execution gives way to a demonstration of local culture: a kava ceremony, which is the preparation and ritual drinking of a liquid made from kava root. Rachael wears her bigotry proudly by calling the local beverage ‘dirt water’ and laughing at Jared for respectfully drinking. Jared is impressed by her thoughtlessness and the date ends on a high note.

Leah continues wallow in her manufactured depression, seemingly unaware of the blessing in not having to deal with these men. She decides to leave Paradise again again. Keira tells her to shut up again again.

The pre-ceremony cocktail party begins and Leah is completely lost in her delusions. She now genuinely seems to believe that she is in love with Jared, despite saying she only wanted him around to give her roses until she meets someone better. But Jared just isn’t into her anymore and locks in his decision to give Rachael his rose. For some reason the drama surrounding this love triangle continues to be the hot topic of discussion, causing Jared no small amount of confusion.

Now, let’s get this ceremony out of the way. Apollo picks Simone, continuing to ignore her myriad faults. Sam picks Tara, Grant takes Ali and Jarrod gives it up to Keira, getting the particularly dull ones out of the way. Thomas steps up and, seeing no other options available, just locks in the woman he most recently spoke with, which amusingly is Rachael. American Jared begins to freak out while Jake takes Megan. Eden rocks up and picks Elora, who must have some form of Stockholm syndrome as she isn’t horrified by his continued attentions. Finally, American Jared reaches breaking point and, not seeming to register Sasha as an option at all, settles for Leah. Keira, who has quickly transformed herself into the people’s champion this episode, loudly ridicules Leah, threatening to cast her out to sea if she ever mentions leaving again.

And so ends our latest foray into the heart of darkness. Stay strong, ladies and gentlemen, I have a feeling our demented journey is coming to an end soon. Stay tuned for more info. 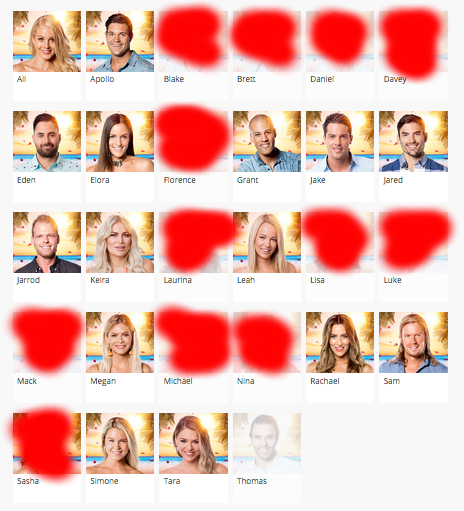