Warning: "continue" targeting switch is equivalent to "break". Did you mean to use "continue 2"? in /nfs/c05/h05/mnt/159427/domains/leidenmagazine.com.au/html/wp-content/plugins/essential-grid/includes/item-skin.class.php on line 1041
 Leiden Recaps: Bachelor in Paradise Australia Episode Ten

Here we are, ladies and gentlemen, at the precipice of madness: episode ten. To be perfectly honest, I didn’t think we’d make it this far. I was under the impression that someone was going to come along and mercifully shoot me before we got to this point but oh well, we’re here now so we may as well dig in.

Things are looking grim in Paradise. We open as Apollo and Sam compete to see who can utter the word ‘drama’ more times while they discuss the ongoing feud between Elora and Simone. Meanwhile, Keanu Reeves (Michael) is still waiting for Lisa to hit the ball back into his court, apparently unaware that Lisa has resolutely cast that ball into the ocean. Lastly, Eden is feeling the heat, finally becoming aware of just how repugnant he is to women; though he is ‘still seeking to find a connection with someone’ and has quite the plan in mind for forming that connection.

With the tone set firmly at miserable we can now usher in our newest meat-bag: Canadian model Thomas, who immediately tries to force the nickname ‘Hercules’ upon his arrival. Megan is the first to be drawn into Thomas’ orbit, keen on how much ‘hotter’ he is than the current sap she’s attached to (Jake). The pair go off for a chat, where we learn that Thomas is an ‘artist’ and a ‘guitarist’, which puts his possession of a man-bun in a much clearer perspective. Megan finds him intense and comments that not only is he hotter than Jake, but he’s a better conversationalist too, which is not as lofty an endorsement as she seems to think it is.

Across the way, Keira and Jarrod point out to Keanu that his strategy of ignoring Lisa for days on end has yielded sub-par results and suggest that maybe it’s time to talk to her. Keanu is emboldened by their words and marches forth to win Lisa’s heart once and for all, pulling her aside and making his case with passionate fervour. Lisa responds by looking in every direction but his before hammering the final nail in the coffin: she wants Luke and no one else.

Keanu runs off weeping into the arms of a producer, telling him that he’s fed up with Paradise and wants to leave for good. The producer puts up a shallow display of sympathy before calling Keanu a cab and waving him off into the lonely horizon.

But Lisa won’t let Keanu escape his misery so easily: the time has come for her and Luke to return to the real world and start flaunting everything they have, wherever Keanu tries to call home no doubt. Luke doesn’t want to return to real life, however. He needs more time on fantasy island before he can confirm that what they have is real. Lisa storms off to pack her bags, ready to leave Paradise on her own if she has to; but she’s just got to talk to Luke about it first — again.

Interestingly enough, the conversation goes swimmingly the second time around. Luke confesses that while he cannot see himself with anyone else, he doesn’t think he can get to know Lisa unless he’s got a camera crew filming their every move. But he nobly decides to push past this hurdle and leave Paradise once and for all. A taxi pulls up and Luke and Lisa drive off into the vapid horizon.

There’s little time to celebrate the passing of three contestants, however, as the newest date card arrives. The recipient of the card is revealed to be Elora, sparking jeers and hooting from the rest of the house. Elora stares a deeply uncomfortable Apollo in the eye and uses the card on him, which he meekly acquiesces to. They head off to their designated activity while Simone discusses her issues with Paradise’s bartender, who does an amazing job of feigning interest. Thomas tries to capitalise on Simone’s vulnerable state but instead finds himself being burned alive by her warrantless hostility.

Luckily for Simone, the date (lunch in the rain) is bland even by Paradise’s standards. Apollo fishes for compliments while Elora mocks his inability to speak French. Apollo mentions that he doesn’t like people who complain about things and Elora seems to think this puts her in a good position, having forgotten her half-hour complain-athon from the previous episode. The two return from the date with no one but Simone having much to say about it.

Megan, meanwhile, is confiding to Keira that she is torn between Jake and Thomas. Keira spouts some Freudian gibberish which somehow puts things into perspective for Megan, just in time for Thomas to come over, offer her his date card and be unceremoniously rejected.

Thomas then rebounds from one girl to another, being rejected by damn near every single woman on the island. His confidence shattered, Thomas goes off to weep on a series of benches. The rest of the men see an opportunity here and decide to help themselves to Thomas, taking the poor wretch out on a group date. The men all seem genuinely happy to escape the women they love, piling into a milk bath and gleefully drinking massage oil in what many of them later describe as ‘the best date I’ve ever had’.

As the girls discuss their picks for the upcoming rose ceremony, Elora reveals that American Jared has written her a love letter full of sweet nothings, and that she intends to give him her rose tonight as a result — unless she gets to take a shot at Apollo, of course. Everyone is moved by this, except American Jared who has no idea what the hell anyone is talking about. The letter is revealed to be a fake and all eyes are on Simone. American Jared steps in to defend Simone, giving her far too much credit by claiming she wouldn’t be that stupid.

As everyone is discussing who could have possibly written the letter, Eden gloats to the camera that he wrote it, apparently hoping the ‘prank’ would bring he and Elora closer together. The rest of the house somehow becomes aware of this through some truly bizarre editing and Eden is quickly forced to come clean. Eden attempts to apologise to Elora, assuring her that his actions didn’t come from jealousy or malice, but simply from being amused by degrading her.

And finally we come to the rose ceremony. Simone is up first and insta-locks Apollo. Leah follows and takes American Jared for some reason, possibly pity. Tara takes Sam again (yawn, again). Ali locks in Grant. Keira happily picks Jarrod, who, amazingly, is also happy. And then we get to Megan, who takes her time mulling over her options. Thomas’ baseless confidence has returned and he is certain she’ll pick him. She picks Jake, rending Thomas low yet again. Lastly we have Elora, who for some ungodly reason chooses Eden over Thomas, dealing the final devastating blow in the conga-line of humiliation that has been Thomas’ one and only episode in Paradise.

As the episode comes to a long overdue close, Thomas’ is expunged from Paradise and from my memory. And with my duty complete, I am off to bed to dream of early cancellation. 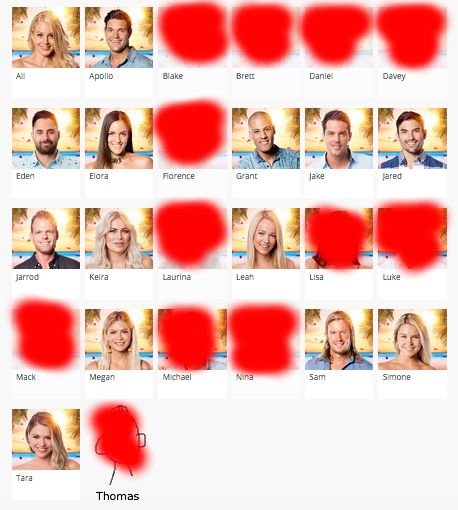