Warning: "continue" targeting switch is equivalent to "break". Did you mean to use "continue 2"? in /nfs/c05/h05/mnt/159427/domains/leidenmagazine.com.au/html/wp-content/plugins/essential-grid/includes/item-skin.class.php on line 1041
 Leiden Recaps: The Bachelor in Paradise Australia Episode Nine

Our Bachelor recaps reap on, ladies and gentlemen. And with so much quality content waiting to be dissected, why don’t we just dive right in to the gaping maw of The Bachelor in Paradise: episode nine?

We open by surveying the damages done in the wake of last episode’s rose ceremony — which appear to be minimal. Keanu Reeves (Michael), after giving his rose to Lisa in a Judas-esque betrayal of Luke, appears to be back to his old un-dynamic self, content to wait for Lisa to come to him. As he’s saying this, however, Lisa is renewing her vows to Luke, now claiming that she only accepted the rose for the novelty factor, and assuring Luke that she has no feelings for Keanu.

Eden, on the other hand, is being far more productive in reaping what he’s sown. The newest date card has just arrived and, unfortunately for Elora, it’s got Eden’s slimy name written all over it. Eden obviously uses the card to pounce on a thoroughly disappointed Elora, who immediately confides to the camera that she finds Eden repulsive and that she’s only here for (spoilers) Apollo.

The date begins and Elora’s patience is already wearing thin as Eden muses on how much sand there is by the beach. Having failed at conversation, Eden ramps things up by repeatedly attempting to grope Elora, apparently unaware that her shoving is not intended to be playful. Elora again tells the camera just how much she loathes Eden.

Back by the pool Jarrod and Jared are discussing Simone; Jarrod feels like things are going really well between he and Simone. Over by the other end of the pool, however, Simone is complaining to Keanu that Jarrod isn’t very attractive and that all she wants is a pretty boy who’s really pretty and just pretty. Responding to the call of love, Paradise brings in its newest victim: Apollo.

Eden’s date continues and, having failed to get anywhere by groping her, attempts to open Elora up by showing off his best Mack impression and staring at her with disconcerting focus. Elora tells the camera yet again that she really, truly hates this man. As the uncomfortable silence continues, Eden has a psychotic break and starts throwing food at her. Oddly, this doesn’t lighten Elora’s mood and she promptly storms off as Eden congratulates himself on a job well done.

Back home new guy Apollo is ruminating which one of the lascivious ladies to use his date card on. Keira decides to help him out by groggily stumbling through a conversation with him, thus eliminating herself from the equation. With that taken care of she then moves on to her continuing vendetta against Jarrod and Simone. But she’s too late, the transition from morning to midday has already caused Jarrod to move on from his attraction to Simone. Now it seems he’s ready to waltz back into the minefield of Keira.

Meanwhile, Apollo has been debating the existence of sea turtles with Simone, a conversation he apparently finds extremely stimulating as she is quickly revealed to be the recipient of his date card. This news pleases the rest of the house, who are all giddy over the violence that will no doubt erupt once Elora returns from her exile to Eden.

Elora is indeed shocked to learn of Apollo’s arrival and upcoming date. Unfortunately, she does not settle the issue with spectacular violence, but with an agonisingly dull tirade that will consume the entirety of her screen time for the remainder of the episode.

Keira and Jarrod sneak off to one the island’s many cheeseboards to finally sort their issues out once and for all. Jarrod is certain that Keira is the one for him now, though Keira remains confused by his constant attempts to remove her from the island. Jarrod claims he was confused, apparently not able to grasp the intricacies of the rose ceremony. Keira agrees with Jarrod’s claims of ignorance and pulls him in for the kiss of death, which comes just in time for Jarrod to claim that she has given him a ‘reason to live’.

Apollo and Simone then proceed to their hot date: fishing refuse out of the ocean. Simone demands Apollo strip down so that she can ogle his Olympian physique. Apollo is more than happy to have his personality fall by the wayside and poses for the mad woman as she rubs oil into his chest and cackles maniacally. Once Apollo is embalmed they then climb into their kayak and paddle out to collect some bottles. The monotony of the errand seems to be too much for them, however, and they both attempt to drown themselves several times over in order to escape the assigned task.

They do eventually manage to complete their task but, unfortunately, something worse is around the corner. Now they must pull conversation starters out of the bottles they have collected and read them out to one another. What follows is a series of uninspired questions drawing out equally uninspired answers, in which both parties do nothing but compliment themselves.

Evening falls and Simone and Apollo return from their date having had a decent enough time. But decent enough isn’t good enough for the Bachelor and the show spends the next twenty minutes hyping up the mind numbing drama between Simone and Elora long after anything resembling drama has dried up. Thus ends another day in Paradise. And while Keira is sure that the next episode is going to be wild, I am ever the sceptic. But who knows? Perhaps we’ll finally get that bloodbath we’re all hoping for. 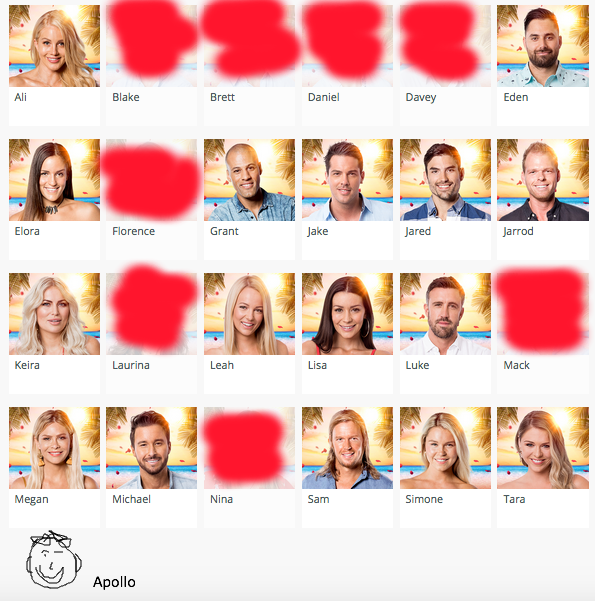