Warning: "continue" targeting switch is equivalent to "break". Did you mean to use "continue 2"? in /nfs/c05/h05/mnt/159427/domains/leidenmagazine.com.au/html/wp-content/plugins/essential-grid/includes/item-skin.class.php on line 1041
 Leiden Recaps: Bachelor in Paradise Australia Episode Seven | Leiden

The rapid fire onslaught of vapid drama continues, with barely enough time for me to fortify my spirits with gin. But fret not, ladies and gentlemen; my spirits have been thoroughly barricaded and I am bravely marching on, into the cavernous abyss of banality that is episode seven.

We open with a hopeful shot of the house laughing and fooling around in the pool, apparently having moved on from the fallout of last night’s rose ceremony. But it is soon made clear that all is not well at this halfhearted pool party, as evidenced by Keira loudly declaring to all that she only picked Jarrod out of a deep sense of pity, reaffirming that she in no way considers him a romantic candidate (probably because of the dance). Jarrod takes exception to this and responds by throwing out random gibes in all directions, confident that this will compensate for his palpable feelings of inadequacy. No one is listening, though, as the new contestant is strutting her way over the grassy knoll.

In marches newbie Elora, who wastes no time dragging off Luke for an interview. Luke holds fast to his status as decor and refuses her offer for a date. Next up we have Jake, who doesn’t say no to the prospect of going on a date but does make it clear that he’s ready to join Luke in the background. So, after being mistaken for a lesbian, Elora elects to settle for Keanu Reeves (Michael), who is more than happy to break away from the sudden and baseless clinging of Leah. And, with Leah muttering curses under her breath, Elora goes off to blow Keanu… a nice vase at a glass blowing workshop.

Somehow, being surrounded by phallic imagery doesn’t put Michael in a romantic mood and the date ends on a flaccid note, with Elora being shot down for the third time in a single day. Luckily the camera doesn’t linger on her shame for very long as it’s already time for our new contestant: Simone.

Simone wobbles in on oversized novelty heels, flicking her synthetic blonde hair back and forth as she struggles to hold down what little scraps of dress the producers have deigned to give her. Jarrod looks up and is instantly struck with whatever passes for attraction on this island, leaping upon Simone with steamy intent. But Jarrod cannot maintain this newfound romantic verve for long and the discussion quickly falls back to his feelings of betrayal at the hands of Keira, leaving Simone with an expression of bored loathing.

Keira sees Jarrod applying the advice she gave him to move on does not take it well. She begins to nurse a drunken rage throughout the remainder of the day, badgering anyone unlucky enough to be within her line of sight. Meanwhile, Jarrod is receiving a conga line of counsellors advising him to stay away from Keira at all costs; chief among these is Grant, who uses Jarrod’s fear of being ‘played’ to illustrate how Keira is ‘playing’ him. Jarrod is grateful for the advice and finally seems ready to move on from his addiction to Keira.

Unfortunately, Keira catches wind of Grant’s intervention and brings her inebriated wrath down on him in a manner reminiscent of the halcyon days when Florence was the most loathsome woman in Paradise. After yelling at a bored Grant, she materialises a cocktail out of thin air and stumbles off into the woods, assuring the house that they do not want to mess with her. As Jarrod looks on at the twisted ranting, a smile crosses his face, and he confirms to the camera that he somehow finds it all rather endearing.

Finally, shockingly, Laurina has become a genuinely likeable presence on the island due to the rest of the house despising her for not engaging anyone romantically and instead spending all of her time relaxing and reading books in isolation from the others. Sadly, she is forced into a corner when she is made the recipient of the latest date card. She tries to reject the card by informing the house she has no love for any of them and going to bed early which, reasonable as it may seem, doesn’t gel well with the house. Having no other option, she drags a producer aside and begins weeping.

As the episode closes out, I cannot help but feel a sharp pang of sympathy for Laurina: her despair at being a part of the Bachelor mirroring my own despair at having to watch it. Fortunately, the ending teaser promises an Earth shattering revelation from Keanu at the upcoming rose ceremony, which will no doubt confirm my long standing suspicion of his homosexuality. So at least we still have something to look forward to. 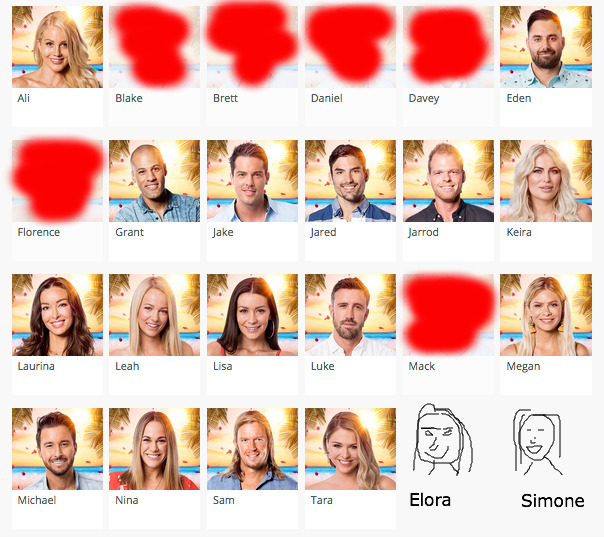