Warning: "continue" targeting switch is equivalent to "break". Did you mean to use "continue 2"? in /nfs/c05/h05/mnt/159427/domains/leidenmagazine.com.au/html/wp-content/plugins/essential-grid/includes/item-skin.class.php on line 1041
 Leiden Recaps: Bachelor in Paradise Australia Episode Six

The Gods are cruel, ladies and gentlemen. When I said the show would continue Tuesday and Wednesday, I did not take into account its continuing on Monday. Maybe I was lying, maybe I was under-informed, maybe I was in denial; either way, duty calls. So without further ado: let’s dig in to episode six.

We open with the despondent men still nursing their bruised egos, which sustained some hefty damage during last night’s ‘American invasion’. The bombs are still dropping, though, as Grant has moved on from Leah and ‘the best date of [his] life’ in favour of Ali, no doubt seeing some glory in winning over the woman who rejects any man that dares to show her affection. Taking a page out of Daniel‘s book, he lures her to the closest body of water, ostensibly to have a chat.

Grant forgoes the tried and true method of drowning and instead chooses to hold her and repeat the word ‘connection’ over and over. And Ali, for once, reciprocates the gesture, echoing his cries of ‘connection’. Leah manages to catch the entire sordid show and is not impressed. She then spends the remainder of the episode ranting about trust and forcing a disinterested Keanu Reeves (Michael) to decode her less than subtle dreams.

With the breakfast betrayal out of the way it’s time for new-contestant-brunch; on the menu today we have American Jared, who appears to be the one responsible for Daniel’s missing jaw, having had it grafted onto his own face. The rest of the men are outraged at the inclusion of another American, none more so than Australian Jarrod, who bursts out of the pack ready to let the fresh meat know who’s boss. As expected, he quickly loses steam and ends up simply shaking American Jared’s hand, bowing and meekly acknowledging his own inferiority in the face of this Adonis from over the seas.

American Jared, however, proves to be just as much of a cold fish as his down-under counterpart, struggling to get Megan to even tolerate a single conversation with him, let alone to accept the date he’s offering her. Somehow, American Jared manages to get Megan on a boat and the two do in fact sail off on a date… a date which, spookily, only Megan seems to return from.

But all of this is child’s play compared to the apocalyptic shenanigans of Daniel who, despite already showing signs of self-loathing at his prescribed role, is tearing Paradise apart at the seams. He’s back on the Keira train this time around and she is just eating up his greasy attentions, much to the dismay of Australian Jarrod, who looks like he’s about ready to walk into the final embrace of the sea.

Thus begins an episode long tennis match between whining bastard Jarrod and regular bastard Daniel as Keira drunkenly rebounds back and forth between the two, unable to make up her mind. (Where have I seen this before?)

As the thrill-less meandering of episode six winds down the only thing left is to cover the rose ceremony which is an insipid affair, livened up only by an amusing confrontation between Eden and Daniel in which Eden takes the concept of verbal diarrhoea to bold new places. Leah latches on to Keanu, bringing her dreams of settling for less to life.

Tara picks Sam, managing to withhold her critical views on his genitals in the process. Lisa takes Luke (yawn). Ali ‘connects’ with Grant. Nina holds fast to the security of Eden, which cracks Daniel’s bored facade. Laurina shows off her incredible memory skills by managing to recall the existence of American Jared, who has reappeared without any warning. Megan apparently still loves Jake even as the rest of the country has lost interest. And then there’s Keira, who wrestles briefly with her inner turmoil and declares infinite love for whining bastard Jarrod, saving Paradise from the tyranny of Daniel.

Daniel swallows bile and plays the part through to the bitter end, insisting that he’s over these chicks and that he doesn’t care about anyone or anything. Also, Mack and Blake get kicked off, not that you would have noticed. So ends episode six: the most inane of the lot so far by far. But surely we’ve hit rock bottom… right? Surely the only direction to go is up… right? 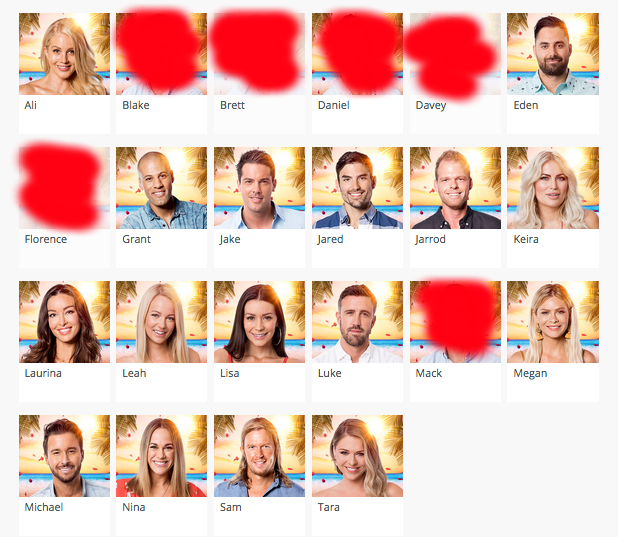