Warning: "continue" targeting switch is equivalent to "break". Did you mean to use "continue 2"? in /nfs/c05/h05/mnt/159427/domains/leidenmagazine.com.au/html/wp-content/plugins/essential-grid/includes/item-skin.class.php on line 1041
 Leiden Recaps: Bachelor in Paradise Episode Australia Five

How the days run away; I feel as though no time has passed at all since I was last here. But, just as the grim spectre of death claims us all, so too does The Bachelor claim me: slowly (oh, God, so slowly) dragging me down into the icy circles of episode five.

We open with the self-satisfied visage of Osher informing us that they’re going to be cramming two more contestants into the overcrowded cells of Paradise. Osher inadvertently, though aptly, compares the Bachelor to Nazi occupied France as he informs us that the new contestants are Americans and that they’re ‘storming the beaches’.

But before we get our first load of hot American we must first endure the fallout from last episode’s elimination. Jarrod shows off his gymnastic skills by back-flipping completely on his previous disgust for Kiera and clinging to her for dear life, well aware that no other woman in the house would touch him with a ten-foot rose. Meanwhile, the rest of the gang are mulling over the mystery of the new contestants. The men are all paranoid, with honourable mention going to Luke, who suspects a Viking raid is coming to burn them all and steal ‘their women’.

Instead of a Viking raid we get a lone bald man named Grant, a divorced (Bachelor arranged marriage) firefighter from L.A. As Grant struts down the runway, we are given the pleasure of watching the collective confidence of the entire male population of the house rapidly crumble into ruin. They compensate for their extraordinarily fragile egos by descending into some kind of less mature version of Lord of the Flies, lashing out at the newcomer with territorial declarations of their ownership of all the women.

The women aren’t ones to be tied down, however, and they each take turns hurling themselves at Grant, begging for his date card in a scene eerily similar to the first appearance of Ali. Grant, obviously taking more pleasure in the misery of the men than in the attentions of the women, takes his time shopping around, threatening to steal Lisa from a catatonic Luke; and then setting eyes on Keira, turning Jarrod’s usual rosy tinge a lovely clown red. But before the melee we’re all hoping for breaks out, in swoops Leah for the win, securing Grant’s date card.

Grant and Leah go off in search of a shark attack while Jarrod vainly attempts to claw his way out of the hole he’s dug with Keira, who is more than happy to see him buried alive in it. She assures him that he is unlikely to be seeing either a kiss or a rose, a statement which turns Jarrod’s lovely shade of clown red a lush poppy. Mack, meanwhile, is doing his darnedest to win Ali’s heart through his unique combination of two-syllable compliments and unwittingly menacing stares. Ali doesn’t seem to mind much, though; indeed, she barely registers his presence at all, choosing instead to direct the bulk of her conversation to the weather. Mack remains optimistic, insisting that the conversation ‘flows like water’.

Not one to be outdone, Keanu Reeves (Michael) lures Ali in with promises of cheese. But Ali can’t handle these love triangles that keep springing up around her and she somehow manages to simultaneously declare her loyalty to Mack, while also disavowing him completely and totally. Doublethink aside, she does manage to free herself from the icy clutches of Keanu just long enough to get trapped into conversation with Mack again, while Keanu looks on with longing rage.

Next up we have the second American: a Canadian named Daniel, who immediately cements himself as the most insufferable man of the year by proclaiming himself, without a trace of irony: ‘the Godfather of the Bachelor. Here to steal all your women’. And boy does he live up to the latter part of that statement as, despite slimy innuendo being his only form of communication, he somehow manages to have the women lined up to grope his equally slimy body. Chief among these Daniel supporters is Keira, who swoons as Daniel woos her by insisting that she’s ‘dirty’.

But, much like Grant, Daniel only seems interested in using the women as weapons to undermine the men and, once the damage to Jarrod’s ego is done, he moves on to Eden and uses his date card to steal away Nina. And off they go to the hot springs, leaving Eden and Jarrod on the precipice of tears.

Daniel’s desire to see the men unhappy at all costs takes a dark turn as he tries to drown Nina in a river on the way to their date. A local landowner intervenes and sets them back on the course to the hot springs, where a more wholesome drowning can take place. All in all, the date goes over well with Nina who, much like Keira, seems to consider Daniel’s cringe-worthy sexism a positive trait.

Thus episode five comes to a long overdue close (oh yeah, Sam and Tara also squeezed in an insipid date). But don’t breath a sigh of relief just yet as the torment is only just beginning. With new episodes coming Tuesday and Wednesday, only the grim spectre of death will be able to save us now. 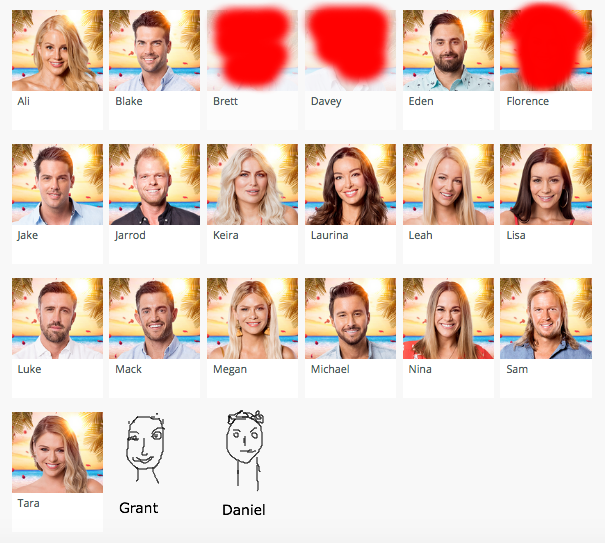