Warning: "continue" targeting switch is equivalent to "break". Did you mean to use "continue 2"? in /nfs/c05/h05/mnt/159427/domains/leidenmagazine.com.au/html/wp-content/plugins/essential-grid/includes/item-skin.class.php on line 1041
 Leiden Recap: Bachelor in Paradise Australia Episode Four

Here we are, ladies and gentlemen. This is the big one. This is the one that will ‘change Bachelor history forever’. And about time, I say; after the joyless torment that was episode three I could use some excitement. But will there be blood? All signs point to yes as we open with Jake and newcomer Megan emerging from their blind date, which immediately earns them both the wrathful gaze of Florence, who does not seem terribly enthused at the prospect of Jake being happy.

Megan starts by doing the introductory rounds, which are cut short as everyone is much less concerned with pointless details like her name, and much more interested in the core of her personality: her bisexuality, which is convenient as it is evidently her favourite topic as well. While most of the house struggles to wrap their fragmented minds around the concept, Florence uses the topic as an opportunity to take a less-than-subtle jab at Jake, loudly declaring that Megan is ‘better than any of the men here’.

With that task taken care of, Florence then yanks Jake aside for yet another serving of her enraged gibberish. Florence feels that Jake is not showering enough attention on her, choosing instead to go on blind dates and hide off-camera whenever she stomps by. Jake insists that he has done everything possible to get close to her and to make her love him; and for once I cannot disagree, Jake’s efforts to win Florence’s heart have been truly heroic, often to the point of suicidal madness but… still, he tried.

Moving right along, Jarrod still has a date card and the girls are all abuzz trying to guess how he’ll spend it. Keira stands out from the crowd on this front by being the only woman on the island who perceives him as a romantic option, though even she has trouble enumerating his attractive qualities, settling instead for the simple declaration: ‘he’s a man’. Her confidence is not set in stone, however, as she is worried that he might pick Ali for the date instead. A fear that is entirely justified as Ali is exactly who he picks (because of her beautiful soul), much to the overt chagrin of the rest of the men.

The date begins optimistically as they amble along to their destination, chatting and giggling as if genuine feeling was emerging. But things quickly turn grim as they reach the main date event: a lesson in local dance, given by a small troupe of local Fijians. The prospect of dancing has Jarrod on edge, but one look at Ali gives him all the energy he needs to get going (because of her beautiful soul). He then proceeds to put on a gruesome display that will forever preclude him from being considered a potential sexual candidate by any human being, living or dead; it is in this moment that Ali’s goodwill towards the tragic mediocrity that is Jarrod withers and dies, never to be reborn.

Back at base camp Florence’s rage has not withered and died in the slightest, rather, it has somehow managed to stir itself into a delirious maelstrom of fury. Since we last saw her she has conjured up some kind of anti-Florence conspiracy theory, the figurehead of which is obviously Jake. After the others take turns heaping fuel on this fire, it’s off to the races as Florence once again drags Jake off for a chat, this time into a private bungalow. And while we don’t get to see what happens inside, the tastefully inserted shots of ocean storms, coupled with the sounds of loud cursing give us a clue; then, suddenly, a crash rings out: Jake is dead.

Unfortunately, Florence couldn’t actually go through with it and we learn that she just threw sparkling wine all over him, which, in typical Jake fashion, proves to be the key to wining him back. But with so little time until the rose ceremony, can Florence pile on enough verbal and physical abuse to secure the love she so desperately does not want?

The hours pass, night falls, and the rose ceremony begins. Osher steps in to remind us how the ceremony works, taking a disturbingly sadistic glee in telling the women that one of them is about to be ejected from paradise. Right from the get go things are looking bad for the women as six out of eight men are frothing at the mouth over Ali (because of her beautiful soul). But the rule of law still holds in paradise, and only one of them can subject the poor girl to their advances.

First up is Mack, who locks in Ali. Great. Not surprising as we all knew she’d be picked no matter who the first guy up was. Things get a little more interesting as Jarrod follows and settles for Keira, putting no effort at all into hiding his disappointment; Keira in turn wears her sense of indignity openly.

Third is Eden, picking Nina: boring; then Luke, picking Lisa: also boring. This functions as a kind of intermission to let us breath before the highlight that is Blake’s rose. Laurina gazes at Blake, certain that his love will hold true; Blake gazes back adoringly and offers her his rose, mistaking her name for Lenora in the process. With few options available, Laurina swallows what little is left of her dignity, takes the rose and shuffles off screen, no doubt in search of the nearest sharp object.

After that debacle we have another breather in the form of Sam picking Tara. It’s Keanu’s turn next, but he’s finding the choice a little difficult, with only the unwanted scraps of Leah, Megan and Florence remaining. The choice is made even more difficult by Jake having a nervous breakdown right next to him. It seems the prospect of having to choose between Florence and Megan is just too much for poor Jake and he resorts to covertly begging Keanu to pick Florence.

Then, in a moment of audacity so wonderful I cannot help but salute, Keanu offers his rose to Leah, relishing in Jake’s crumbling hopes and dreams to a degree that would make Satan proud. And so we finish with a broken Jake, who reluctantly staggers into the spotlight and offers his rose to Megan, putting an end to Florence’s reign of terror once and for all.

Thus ends episode four of Bachelor in Paradise; and it seems they really were able to ‘change Bachelor history forever’ as, in my own experience, this is the first time in Bachelor history that something mildly entertaining has occurred. With any luck this could be a new leaf for TV’s most worn out concept. 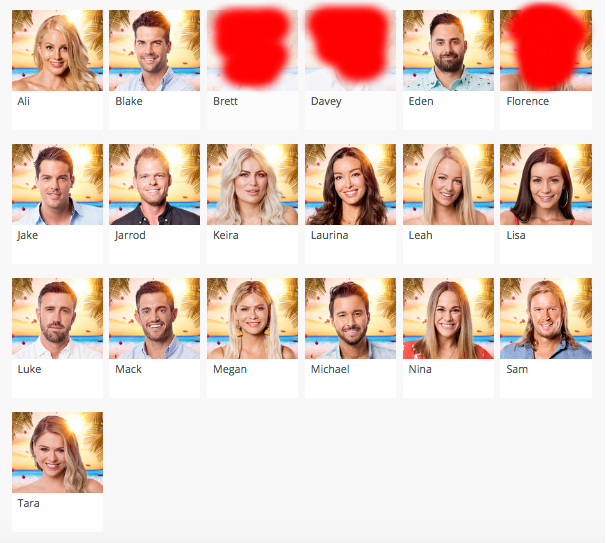