Warning: "continue" targeting switch is equivalent to "break". Did you mean to use "continue 2"? in /nfs/c05/h05/mnt/159427/domains/leidenmagazine.com.au/html/wp-content/plugins/essential-grid/includes/item-skin.class.php on line 1041
 Leiden Recap: Bachelor in Paradise Australia Episode Three

Our journey deep into the terrible heart of paradise continues as we open with some scattered shots of the specimens chatting, and of Florence glowering; all is well after the tumult of last episode’s elimination… or so it seems.

This idyllic display is quickly shattered by the arrival of the newest date card. As a crowd forms around the envelope we are shown an unusually large amount of aside shots of Keanu Reeves (Michael), who gesticulates wildly while attempting to explain to the uneducated masses just how big an event this is.

With the appropriate level of tension built up the card is opened and we find that the date choice goes to Keira, who quickly sidles up to Reeves and whispers in his ear her intentions of using the date card on him. Surprisingly, the secret doesn’t last long as the island soon puzzles her choice of date out. No one is hit harder by this revelation than Tara, who at some point has apparently become the one and only for Keanu. This sentiment is echoed by Keanu himself, though the effect is somewhat diminished by his riding off into the sunrise on horseback with Keira by his side.

But Tara isn’t the only one wearing the horns today as, in choosing Keanu, Keira has loudly declared her completely understandable indifference to that forgettable newcomer from last episode, Sam. Sam has apparently developed some kind of inferiority complex since we last saw him as he spends most of his introduction here desperately screeching over any and every conversation he can muscle his way into.

Sensing that Tara could probably stand to be a little more miserable, he approaches and attempts to comfort her over the betrayal they have both been stung by. And while Tara insists that she is totally fine with these events (a statement that would be more convincing were she not stirring her drink at two-hundred kilometres per-hour), she does deign to wallow in her rejection with Sam.

Not that there’s anything to be truly jealous of anyway as the date is apparently so boring that we don’t even get to see the majority of it. The few bland nuggets we do see are of some staged horse riding followed by yet another monologue from Keanu, this time about his undying love for Tara.

Unfortunately for him, Tara has abandoned ship and is now seemingly all about ‘Uncle Sam’, much to Sam’s delight. Though the fact that she spent the day questioning the masculinity of his genitals and calling him ‘uncle’ paints a bleak picture for this new triangle.

Meanwhile, a new contestant is introduced in the form Jarrod, who is a survivor of Sophie Monk. Jarrod quickly starts shaking things up by talking to the women and getting to know them a bit, something which fosters no small amount of paranoia in the other men, who feel that Jarrod is going to steal all the women from them. The women, on the other hand, simply seem amused by the appearance of the ‘pot plant guy’, which, granted, still places him head and shoulders above most of the other men.

Almost as quickly as he is introduced, however, we find yet another contestant is being jammed into paradise. This one is named Ali, and despite being identical to every other blond woman on this show, she is inexplicably hailed as Aphrodite incarnate by the entire male population of the house, including Jake who, until this point, has only appeared in the hateful ramblings of Florence.

Jarrod, seeing that she has a ‘pure soul’, declares love at first sight and falls upon her with all speed, seducing her with banal chit-chat about his winery, a topic he won’t hesitate to bring up with anyone willing to listen. But he is outmanoeuvred by Mack, who defeats him with the ingenious plan of sitting next to them and refusing to leave.

Now it’ s Mack’s turn to see that ‘soul’ of hers and boy does he play grovelling to the hilt as he visibly sweats while praising her thoughtfulness and insight as she asks him such puzzlers as ‘what do you do?’

The good news is that the camera does not hover over this grim spectacle for long. The bad news is that it only breaks away to introduce yet another contestant. And the ugly news is that the new contestant is being introduced by Osher, which seems excessively cruel when one considers that the previous two contestants were both spared from having to engage the gatekeeper to paradise.

So here we have new girl Megan, who ― OMG ― is bisexual, a fact that Osher seems more than happy to parade around as if it isn’t 2018 and that her orientation is somehow shocking. In return for tolerating the Y-list celebrity, Megan is granted a mystery date with one of the other contestants, who, according to her menu, is ‘fun’ and ‘motivating’, descriptors which don’t seem to line up with anyone in the house, leaving the date just as much a mystery to her as it is to us.

The mystery date turns out to be Jake, who, in the most merciful bout of amnesia ever recorded, has forgotten the existence of Florence entirely. And good riddance too because there’s obviously no room in this stud’s heart for anyone by Megan. The two start their date off amicably, discussing things such as the ephemeral nature of paradise and the role of masculinity in modern society. And things only get steamier when they relocate to the couch, where Jake shows off his signature move: moving a girl’s hair back behind her ear. Impressively, he managed to pull it off despite Megan’s hair already being tucked firmly behind both of her ears. But Jake’s not out of moves yet; just as the date comes to a close he initiates what will most likely win least erotic kiss of the year.

So we come to the end of episode three. And I’m sure you’re all left with so many questions: will Tara forgive Keanu? Is Florence planning to murder Jake, and if so where will she hide the body? But amongst all the drama, one question rings out to me above all others. When will it end? 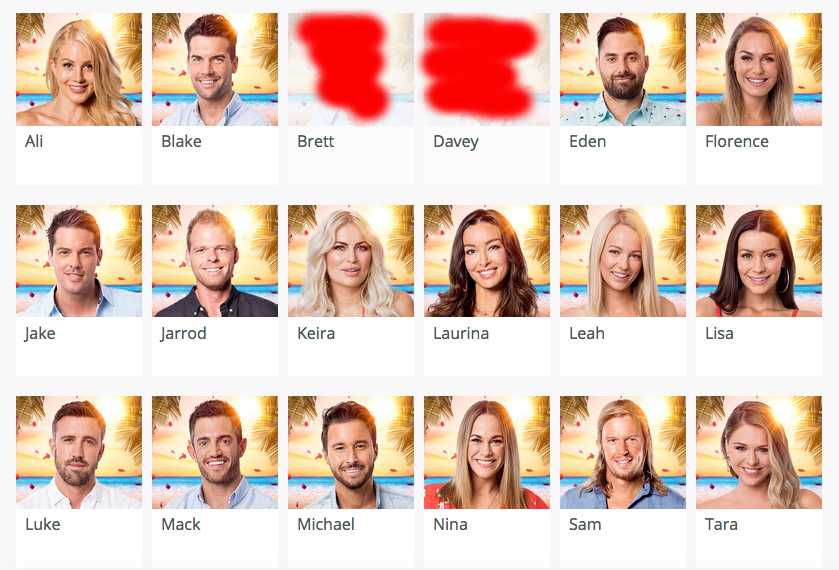