Warning: "continue" targeting switch is equivalent to "break". Did you mean to use "continue 2"? in /nfs/c05/h05/mnt/159427/domains/leidenmagazine.com.au/html/wp-content/plugins/essential-grid/includes/item-skin.class.php on line 1041
 Leiden Recaps: Bachelor in Paradise Australia Episode One | Leiden

We open with a breathtaking panorama of the limpid waters and lush forests of ‘paradise’ (Fiji), no doubt the last enchanting image we’ll see for a long time. Cynicism aside, the message is clear: if love can bloom anywhere, its here. The scenery is artfully juxtaposed as Osher Günsberg slowly ambles into view, regurgitating something about ‘second chances’ and ‘true love’ while setting up the entrance of the first contestant.

But who is it? Honestly, I don’t know; I’m having my Bachelor(ette) cherry popped as I watch. But her name is Tara and she’s a ‘sweaty’ blonde who believes things happen for a reason. After a stilted conversation with Osher, in which neither party gives the impression of anything remotely resembling enthusiasm, Tara is permitted entry into paradise. Up next we have Michael, who is kind of like a less expressive Keanu Reeves. Michael also survives the ordeal of speaking with Osher and moves on to paradise.

So now with two people in the house things can finally start heating up. And boy do things heat up. The two immediately make it clear why they did not win their respective seasons as Tara boasts about her prodigious sweat glands while a vacant Michael kind of just stares off into the ether. Fortunately, we are spared from having to endure this tragic spectacle for long as the remaining contestants begin to pour in.

Unfortunately, this is where things get confusing, as the producers of the show seem to have had the Aryan Union in mind when putting out the casting call. The end result of which is a cast of faces so uniformly bland that I don’t really know who’s who even while looking at the official guide. But the producers are kind, and the focus falls on only four of our eighteen cast members: the soon to be iconic love square of Davey, Florence, Jake and Leah.

Cue the unfortunate reappearance of Osher, who informs the cast that three of them are going home in this first round of eliminations, and that the girls ‘hold all the power’. But wait, there’s more: whoever’s name is in Osher’s mysterious envelope will be able to go on a date with anyone they so desire, regardless of their date’s desires. The men all seem keenly aware of their own inadequacies as they uniformly freak out at the very real prospect of losing The Bachelor twice. Davey begs Florence to promise him a rose during the elimination ceremony, which would secure his safety. But Florence seems understandably ambivalent towards the prospect of promising anything to a ‘larrikin’ like Davey.

But Davey’s in luck: it’s his name in the magic envelope. Now he has the perfect opportunity to woo Florence and earn that rose; and how better to go about this than asking Leah on a date instead? Florence is understandably peeved at this turn of events and processes the whole thing by insisting he’s not worth her time anymore, while simultaneously refusing to stop talking about it to anyone.

Davey, on the other hand, is having a great time casting off the shackles of Florence, as he explains to Leah in a line reminiscent of Byron: ‘I feel like I can get on more levels with you’. Leah cannot contain her lust after this saccharine declaration and kisses him, regretting the decision with such speed it was almost impressive.

Meanwhile, Florence has found a healthier outlet for her frustration: abusing those she has emotional leverage over. She takes Jake aside on the pretext of a romantic heart to heart about their previous hookup in the outside world but things quickly take a turn when Florence makes some kind of accusation regarding Jake’s approval rating and ‘reputation’. From here the two engage in an argument so garbled and bizarre that I honestly don’t know what they were talking about even after hearing my de-facto wife’s attempts at translation. But while the words may not have been clear, the emotions were, as Jake runs off in a truly heroic attempt at withholding tears.

And so our first episode of Paradise ends, but not before teasing us with the announcement of the second date winners: Florence and Jake. Will Jake survive? Will Davey get on Leah’s level? And, oh yeah, who the hell is this new contestant waddling over in nineteen inch heels? All this and more on the next Leiden Bachelor in Paradise recap.

And now, as I still don’t know who these people are or how this ‘game’ works, here are the top picks for elimination, expertly chosen by the discerning eye of my de-facto wife, Emma: Eden (he may as well have stayed home for all the air time he has got), Mack (he is still a mega creep and is by far the least attractive and remember your looks are your only currency on this show) and Brett (because there is a lot of confusion about whether he is even ‘single and ready to mingle’). 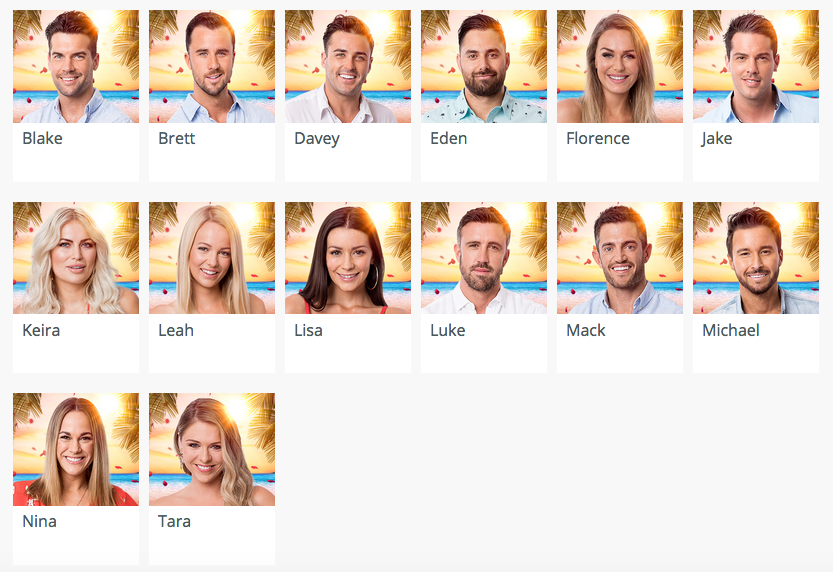