Warning: "continue" targeting switch is equivalent to "break". Did you mean to use "continue 2"? in /nfs/c05/h05/mnt/159427/domains/leidenmagazine.com.au/html/wp-content/plugins/essential-grid/includes/item-skin.class.php on line 1041
 Talking Music, Art and Love - An Interview with Grouplove 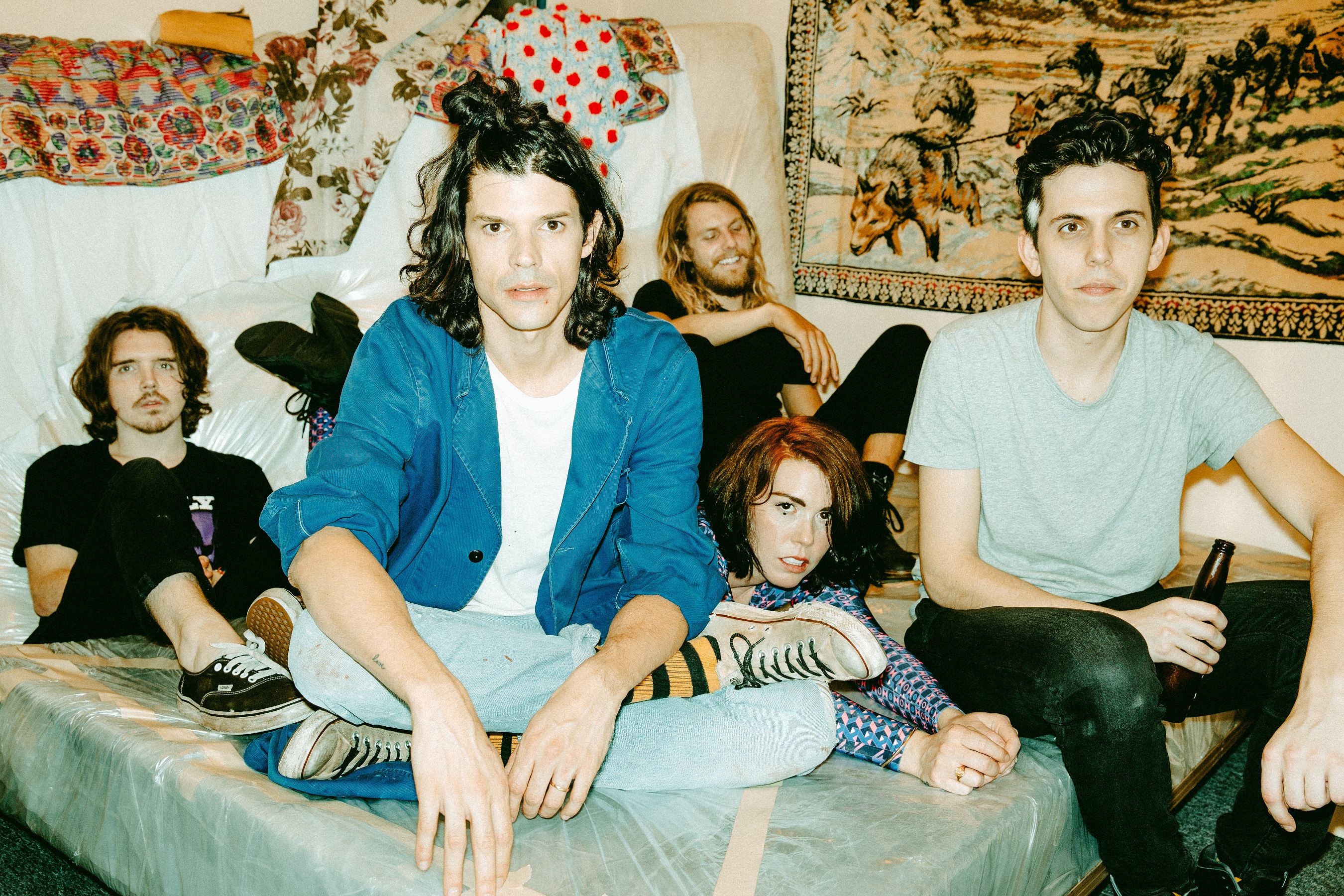 Talking to Andrew Wessen, guitarist and vocalist from American indie-folk pop-rainbow band Grouplove, is like talking to an old friend. It doesn’t feel like a phone interview between an amateur music journalist and a highly successful musician. It feels like a fun chat, we’re laughing and reminiscing. After we joke about Wessen’s inability to say ‘Melbourne’ in an Australian accent, I ask him what he’s been enjoying about Grouplove’s February tour through our east coast.

‘We’re in a hot streak right now. We’re playing new music, and it’s been fun because, having three records out, you get to pull from so much stuff. We actually end up fighting over the setlist every night because we have to leave out so much stuff we want to play.’

As a band that has been making music together for the past nine years, with material from three albums and an EP to choose from, it’s no surprise that Grouplove have a hard time deciding setlists. ‘You obviously know the ones which are like, “Hey, this is a song that did well,” and that translates well live. Then, as a band, you’ve got to pull some weird ones out of the pocket and challenge yourself, otherwise it gets really boring for yourself.’

‘We’re so fired up about the songs we’re writing now that I wouldn’t be surprised if we do have to cut even more of those songs that did well, because honestly, you’ve only got like an hour and a half on stage and you have to cut something unfortunately. Unless you’re Bruce Springsteen and you’ve got like four hours or something.’

Wessen doesn’t believe me when I say I would go to a four-hour Grouplove set, and, to be honest, I don’t know if I believe me either. But, when we start talking about the idea of a mid-set snack break, I think we’re both on board.

Grouplove’s unique skill in bringing a fresh new energy to every performance makes me think they couldn’t ever get boring. I tell Wessen about the key moment that stuck out to me when I saw them at The Factory Theatre, Sydney in 2012. He doesn’t seem to remember when I first start describing, but it was when Hannah Hooper, vocalist and guitarist, started drawing a miscellaneous face on a white sheet in the middle of a song. It clicks. ‘I forgot we did that! That’s so cool!’

‘Hannah came at this whole band thing as a visual artist. She had already been an accomplished artist before the band, like an amazing oil painter with exhibitions in galleries. So, her angle on this band is so different to other musicians who are restricted by like, “No, this chord works with this chord,” and you’re always thinking in a restricted way of what works and what doesn’t, whereas she comes at it in an unhinged, unrestricted way.’

‘If you keep trying things the same way, you’re going to get the same results, right? If you always write the songs in the same way, they’re always going to end up being somewhat similar. We try to completely switch it up. And Hannah’s such a big part of that so I give her a lot of credit.’

When it comes to sticking true to themselves as a band, I think Grouplove have it in the bag. Since the birth of the band, Hooper has made all the artwork and merchandise herself, they’ve written all their songs, and, as Wessen puts it, ‘Everything you see comes from us and I think that hopefully translates.’

I ask him if this DIY-style of functioning as a band becomes more difficult with the external pressures of commercial success. ‘That’s a part of it, you actually have to keep that. You have to believe that, and actually live that, and that keeps you true to yourself and to your band name. A lot of bands aren’t as lucky to have someone like Hannah in the band who’s such a prolific artist and is willing to do that. A lot of people want that stuff taken care of. It’s a pain in the ass, and she spends a lot of time dealing with that.’

Combining different forms of art within their music is a core part of Grouplove’s identity, and I talk to Wessen about how fashion is tied into that. ‘We tour doing a matching outfit thing. Last year we had these massive embroidered denim jackets with a bikie Grouplove emblem on the back. This tour we have these black trench coats that Hannah and our friend made. They over-dyed these military coats and we wear these silver docks. It’s a little goth but it’s cool. We also wear these lace under garment things that goes under our shirts so that if you take your shirt off you have lace under it.’

At this point I’m kicking myself with my plain-coloured docks that I didn’t get tickets to see this fashion phenomenon. ‘It’s a huge part of it, because if you walk up and a band looks fucking sick you’re like, “Hell yeah!” But if you look a little fuddy duddy and a little frumpy it’s like hmm. I mean, I’m a victim, I look at some of the outfits I wore at the beginning of the band and I’m like, “What the fuck are you doing?” But, that’s just growing pains of a young band and being a young kid and chasing every fucking wild thing you see, and then over time you get a true sense of what you’re about.’

‘It’s fun to go on stage and be a little bit larger than life. The point isn’t to wear what you wear to the office. It’s to be that person, whatever you want to be, like the superhero version of yourself.’

Grouplove is inspiring in their fearlessness to explore new things, combining fashion, drawing, painting and dance into all their musical creations. When Wessen confirms their silver docks are from outer space everything makes sense. Grouplove are beautiful, colourful aliens.

Jayne is a melodica-playing, hummus-eating, fun-chasing skater girl who is constantly torn between her identities as a full-time International Security Studies student and a peace-lovin' musician trying to spread the love. Often seen sitting at the misc writer's desk on the O'Connor bike path, or running through Dickson Woolies for snacks at 11:50pm, Jayne is a lover of anything that intersects music, Canberra, and food.