Warning: "continue" targeting switch is equivalent to "break". Did you mean to use "continue 2"? in /nfs/c05/h05/mnt/159427/domains/leidenmagazine.com.au/html/wp-content/plugins/essential-grid/includes/item-skin.class.php on line 1041
 The Dating Game - One Girl’s Tinder Journey | Leiden

After eating too many blocks of Caramello, countless packets of Twisties, and rewatching The Notebook more times than I care to admit (yes, I am that pathetically clichéd), I emerged from my post-break up hole and was once again single and ready to bloody well mingle. Whilst I never imagined myself getting Tinder, after one too many vinos with my fellow single girlfriends, we were all downloading the app and swiping left, right and center. And so begins my weird and wonderful Tinder journey. Whilst I’ve had some fantastic experiences and great dates thanks to Tinder, there have also been some very weird experiences. But these are what make for the best war stories of a single 20-something girl’s life.

Firstly, lets talk about messaging etiquette. I’ve had messages from men that were so polite and direct that I felt like it was a job interview. And I’ve also had messages that were so bizarre that, whilst I applaud their creativity, I had absolutely no idea how to reply. 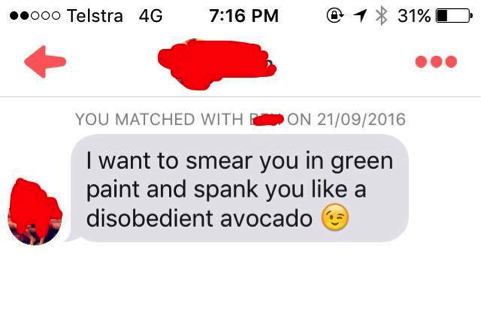 My first Tinder date was with a chap called Tim (names have been changed), or as I call him, Cat Man. We had been chatting on for a few days before we met up. Our online conversation was nothing spectacular, but he seemed like a decent guy. So I donned by cutest corporate-chic outfit and met him after work. What Tim didn’t allude to online was his obsession with cats. I swear on Beyonce’s life that he talked for 18 minutes about his three cats, as well as the cats he had as a child who were now dead. Don’t get me wrong, I love animals, but this was just a bit much for my first online dating experience. Were all the men on Tinder strange cat-men? Is this why they’re on Tinder? Do I dare tell him that I’m actually a dog person?

And then there was the Man That Did Not Speak. Jono and I had great banter online for a few days before we went on a weekend coffee date. Online he seemed smart and witty and he was very attractive. However, this online chemistry soon turned to zilch that ended up with me having a conversation with myself whilst Jono sat there silently. Where was the witty man I chatted to on Tinder? Maybe he was nervous or maybe I wasn’t what he expected, who knows. But it soon turned into a 30 minute coffee where I kept asking and answering my own questions, constantly glancing at my watch and wondering if it was too soon to end the date. Surely he can’t be having a good time if he isn’t speaking? This is one date that I am filing under the unexplained mysteries of dating. 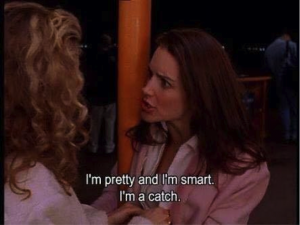 Lastly, there was the Man Who Touched Himself. It started off great. Blake and I got a drink and went for a walk around the lake. We got along well and he seemed lovely. But much like the episode of Sex and the City where Charlotte dates a man who constantly touches his crotch, I kept noticing Blake touching his nether regions. At first, I thought maybe he just had an itch and didn’t think anything of it. But this casual itch turned into longer and longer ‘scratches’ to the point where I genuinely started to wonder if he was lightly masturbating. Surely not? Safe to say I didn’t stick around much longer to find out.

Before Tinder I had never really dated. I somewhat fell into a long-term relationship before experiencing the single-dating life. All I can say is that it’s great fun. You really do win some and lose some, but that’s what keeps it interesting! I’ve learnt that you’re not going to hit it off with everyone and that’s nothing to worry about, it’s only natural. With every date I learn something new about myself and what I want in a partner. And whilst there are definitely some awkward moments involved with Tinder, sometimes you’ve just got to laugh it off, have a vino, and move on. What have you got to lose?

Why Being Single Can Be Fun

Elle is originally from Oxford, England but is now happy to call Australia home. Just like another famous Elle, Elle Summers isn’t afraid to wear head to toe pink, speak her mind or point out crimes against fashion. She adores running, coffee and pretty boys.