Warning: "continue" targeting switch is equivalent to "break". Did you mean to use "continue 2"? in /nfs/c05/h05/mnt/159427/domains/leidenmagazine.com.au/html/wp-content/plugins/essential-grid/includes/item-skin.class.php on line 1041
 Daphne Guinness in Conversation | Leiden

Isabella Blow was a British fashion stylist, editor and muse who nurtured the career of many designers including the late Alexander McQueen and Phillip Treacy. She was passionate, creative and eccentric with a great love of fashion. When Isabella Blow passed away, her friend Daphne Guinness purchased her entire collection of clothes, a portion of which was first displayed in an exhibition at Somerset House in London and now in Sydney at the Powerhouse Museum.

The evening began with Guinness reminiscing her friend. ‘We knew each other from childhood. I then re-met her in 1998 at my cousin’s birthday party. We connected over literature and art as well as fashion. She wasn’t a “fashion” person, she was arty, she was passionate. She took risks and was a perfectionist, she would push people to do their best.’

When asked about coping since her friend Isabella’s death, Guinness said ‘It’s been getting easier with keeping her things together but it’s still hard. It’s also good to keep the people who were part of the story together through the foundation.’ When Guinness purchased Isabella’s clothes, she set up the Isabella Blow Foundation to preserve the collection, facilitate exhibitions, provides scholarships for fashion students and to support and raise awareness of mental health charities. 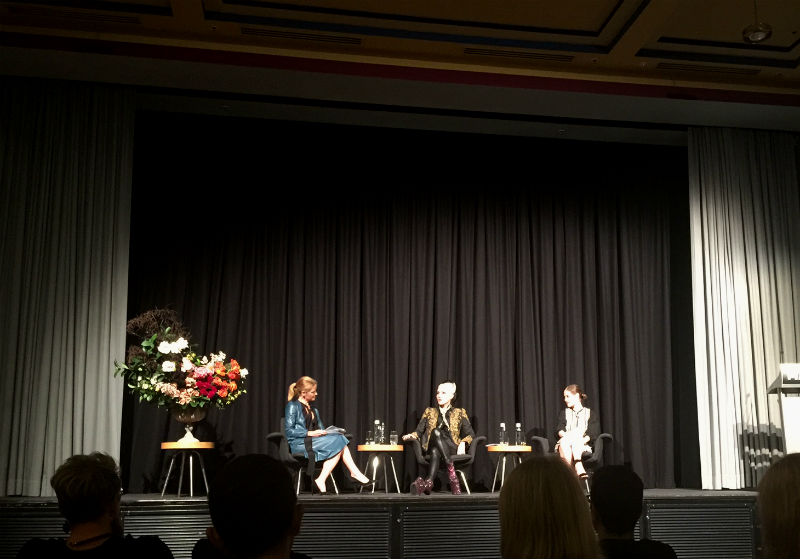 When first viewing the exhibition, as guests attending the talk were able to do prior to taking their seats, one was immediately struck by the atmosphere in the space. Knowing that the clothes had all been worn and lived in by one remarkable person was incredibly moving. ‘It [the exhibition] is very intimate here in Sydney’, explains Guinness. ‘It’s very emotional to see her things without her but the next best thing is to see her legacy intact. It’s not about labels, it’s about the love, the history.

Guinness also remarked of the exhibition, ‘You can see the collaboration between the designer and Isabella. She had a huge influence on McQueen. She would direct him to books and architecture. She was mothering. She really believed in the people she supported.’ A particular cloak on display bears a label with both McQueen’s and Isabella’s names inside the collar, hinting sweetly of their close relationship.

Hush asked Guinness if caring for Isabella’s clothes has made her consider archiving her own collection. ‘I have done an inventory. I’ve got quite a lot of stuff. I do archive it but I do make sure that the things I have are really things I love, rather than just buy a lot of stuff for the sake of it. I wear the same old thing forever and ever.’

Talk turned to the speed of the fashion cycle and the increasing pressure on designers to churn out collection after collection. ‘It is too much,’ Guinness remarked. ‘Valentino once told me he had to design 24 collections a year, it’s exhausting, the minute you’ve shown one you are on the to the next. I’ve seen it with, alas, my friends. If you are an artist but being forced to be creative, it can give you writers block. It is very difficult for an artist. Particularly for the more highly strung, arty ones. The pressure is enormous.’

Guinness is herself an artist, she paints, draws, and does calligraphy but, in her own words, she is most proficient at music. ‘I put poet on my transit form at the airport. It’s difficult to pinpoint what I do because it’s not a job in the “job” sense. I was always drawing as a child. And always imagining.’ Guinness has an album coming out soon of music she describes as closest in genre to psychedelic rock. ‘Fashion, music, art, it all dovetails together,’ she explains.

Guinness has cultivated a strong, individual sense of style to match her creative personality, wearing a gold metallic blazer by Alexander McQueen and sky-high purple glitter booties on the night of the talk. ‘I think fast fashion is great. The Zara’s and H&M‘s have great basics. What I find difficult is that you are only cool if you look a certain way. I’ve always been a misfit. I have a more old fashioned view that you should just wear what you like.’

Judging from her collection of clothes featured in the exhibition, this is a sentiment that Isabella Blow shared. Blow was bold in her choices and seemingly unafraid of what others may have thought. ‘If Isabella was still alive, I think she would be delighted to see that people were being inspired by what she did,’ said Guinness. ‘So many people just get forgotten because of the pace of fashion.’ One thing is for certain, Blow’s legacy will never be forgotten due to the strength and individuality of her body of creative work, and thanks to the dedication of her close friend Daphne Guinness.

Find out more about the Isabella Blow Foundation here.