Warning: "continue" targeting switch is equivalent to "break". Did you mean to use "continue 2"? in /nfs/c05/h05/mnt/159427/domains/leidenmagazine.com.au/html/wp-content/plugins/essential-grid/includes/item-skin.class.php on line 1041
 The 88th Academy Awards Red Carpet | Leiden

Gone are the times when an actor attending the Academy Awards could just roll up in the clothes from their latest film (a la Diane Keaten in her Annie Hall garb) or whatever sparkling confection caught their eye (Meryl Streep in the 80’s), now the Oscars are big business for the fashion houses.  The television air time, social media hype and magazine pages devoted to the Oscars make dressing a celebrity an almost priceless marketing opportunity, such that each house vies to get their outfit on a celebrity of choice. Because of the high level of scrutiny we have seen a move towards playing it safe; no one wants to end up on the worst dressed pages after all, but that doesn’t mean we don’t see some fashion forward looks on the red carpet. A whole team of people is on hand to make sure each celebrity is looking their most ‘effortless’ best and to ensure sartorial success.

We asked Illustrator Judy Kuo to give her spin on the Leiden team’s red carpet faves.

Alicia Vikander in Louis Vuitton and Olivia Wilde in Valentino 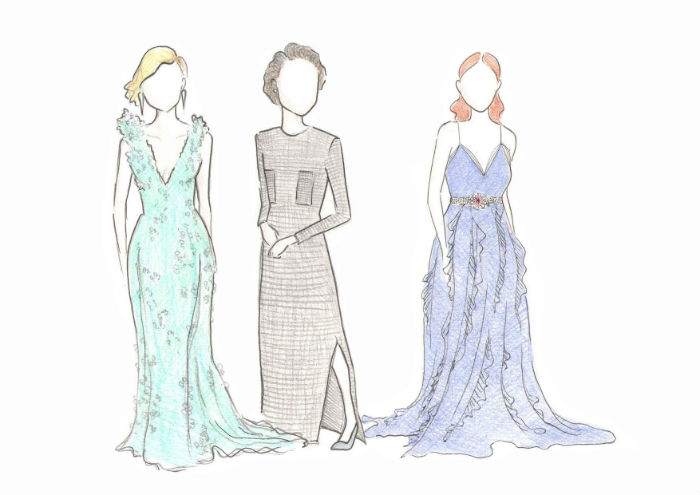 While she studies philosophy and sociology, Judy secretly dreams of becoming an illustrator. Her life goals include building a personal art studio, getting two dogs, and lecturing in contemporary social theory.