Warning: "continue" targeting switch is equivalent to "break". Did you mean to use "continue 2"? in /nfs/c05/h05/mnt/159427/domains/leidenmagazine.com.au/html/wp-content/plugins/essential-grid/includes/item-skin.class.php on line 1041
 Fashion and Gender Flexibility | Leiden 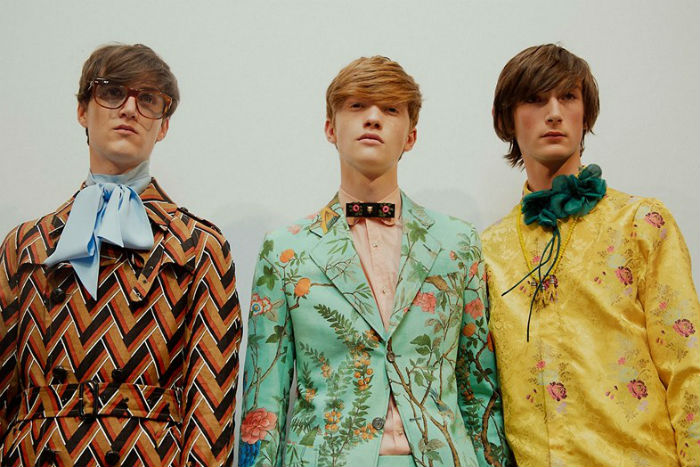 “A woman shall not wear man’s clothing, nor shall a man put on a woman’s clothing; for whoever does these things is an abomination to the LORD your God” (Deuteronomy 22:5)

The Bible is pretty unambiguous when it comes to delineating how men and women should dress – men should dress like men; women should dress like women. The fashion world, however, is increasingly encouraging the opposite. Particularly in avant-garde and haute couture spheres are designers playful and subversive in their understanding of “gender.” They query norms of masculinity and femininity as they undercut and parody expectations about how “men” and “women” should dress.

There are multiple ways that fashion is participating in a kind of gender flexibility: gender-swapping models, consciously androgynous tailoring, Jaden Smith wearing skirts… the list goes on. What is significant about these acts of gender flexibility is that they open up new, broader spaces for people to represent themselves.

Of course, androgynous dressing and instances of gender-bending are nothing new – David Bowie was doing it decades ago and Boy George rocked eye liner in the 80s. However, fashion’s current turn towards gender flexibility speaks to a broader tolerance for alternative ways of self-representation. Before discussing the possibilities that gender flexible fashion offers though, it’s useful to have an understanding of what exactly I mean by “gender”.

For sociologists, people working in gender studies, LGBTQI activists and others, the key to understanding “gender” is that it is a social construct. What this means is the “masculine” behaviours we associate with men and the “feminine” behaviours we associate with women are developed by society, and not by biology. That is, there’s nothing biological to suggest that girls prefer pink while boys prefer blue; that’s just what social entities like the media, advertising and businesses say. Seeing gender as socially constructed also encourages us to question how certain traits are gendered – that is, associated with a particular gender. For instance, helplessness and passivity are gendered “female” while aggressiveness and strength are gendered “male”. This gendering of key traits informs our everyday understanding of masculinity and femininity as they establish gender norms – the expected behaviour of men and women.

Of the many problems with gender norms, the largest is that they require people to subscribe to very narrow models of behaviour; very little space is made for alternative ways of presenting and being: men should be tough, strong and active; women should be gentle, delicate and passive. Furthermore, as gender norms offer only narrow ways of doing masculinity and femininity, their strict binary structure means they don’t entertain the possibility of a space between masculinity and femininity, or indeed, a space that is neither.

The binary restrictiveness of gender norms necessarily affects the way(s) men and women dress. Fortunately, fashion’s gender flexibility opens up new spaces for women and men to represent themselves. Essentially, gender-flexible fashion is asking: “Hey! Are there other ways of being a “man” or being a “woman”? Are there other ways of presenting yourself to the world that refuse these limited stereotypes?” Thus, through various disruptive strategies designers, fashionistas, and stylists are calling in to question the supposed “naturalness” [4] of masculinity and femininity as well as what we consider to be “masculine” or “feminine”.

Gucci’s bow-bedecked chiffon blouses from their Fall ’15 menswear collection is a clear example of such work. In this collection, Gucci puts men in articles of clothing that have typically been gendered “female”. Not only does this force us to reconsider what we think a typical “man” looks like, but it legitimises for men dressing in an alternative way – a way that in its flounces and floatiness has typically been the domain of the feminine.

Similarly, gender-swapping – where male models are cast in womenswear campaigns (or vice versa) – is another strategy for unsettling our assumptions about what men or women can wear, or how they can represent themselves. This gender flexibility creates space for people like Casey Legler and Jaden Smith to present themselves without having to subscribe to rigid gender binaries. Indeed, seeing women walking in menswear campaigns causes the boundaries between “masculine” and “feminine” to become unstable; this instability itself reveals the artifice of the traits associated with both masculinity and femininity – why can’t someone be “tough” and “pretty” at the same time?

Finally, the release of “unisex” clothing lines demonstrate how some in the fashion community refuse to buy into the idea of clothing being gendered in the first place (Selfridge’s Agender only stocks such lines). This consciousness androgyny also looks to call the rigid binaries of gender – men have to dress like men, women have to dress like women – into question.

The fashion world will, hopefully, continue pushing this gender-flexible agenda. The kind of cultural questioning and boundary-pushing it is doing is incredibly important because it is impossible to expect everyone to fit into one of two discrete, gendered boxes. Through questioning gender norms alternative spaces open up – spaces which offer new, flexible ways for people to (re)present as men, women, both or neither.

Esther is sometimes a high school teacher and is mostly a PhD student. She blogs about gender, culture, and media at Not Her Real Name. She also climbs rocks.