Warning: "continue" targeting switch is equivalent to "break". Did you mean to use "continue 2"? in /nfs/c05/h05/mnt/159427/domains/leidenmagazine.com.au/html/wp-content/plugins/essential-grid/includes/item-skin.class.php on line 1041
 Paris Fashion Week - S/S 16 | Leiden

As Paris, the city of light and love is also the fashion capital of the world, it is only fitting that Paris Fashion Week ends what has been an overwhelming month of fashion. The French capital is home to some of the most revered luxury labels as well as being the birthplace of that most envied form of style; Parisian Chic. The shows, the after parties (this year marked the 95th Birthday of French Vogue and the party was huge) and the delicious French food, combine to make Paris Fashion Week one heady mix.

The week kicked off with Jacquemus who explored the dark side of circus in a palette of red white and royal blue. Mary Kate and Ashley Olsen moved their label The Row from New York to Paris this season, a wise move as their brand of quiet luxury is much more fitting for the fashion capital. Christophe Lemaire, the designer formerly at the helm of Hermes, presented the epitome of nonchalant Parisian chic while John Galliano did the exact opposite at Maison Margiela exploring a theme of luxe trash.

Anthony Vaccarello revealed a more sensual than sexual collection for his namesake label than he did for Versus in London, a highlight being sheer slip dresses with sequin detailing. We saw modern Grecian goddess gowns at Vionnet, pretty punks at Haider Ackermann, and Parisian prep at Carven. Sequins abounded at Rochas, Sonia Rykiel and Lanvin, an amazing array of technical fabrication at Loewe, and plaid dresses at Stella McCartney. Rick Owens sent each model down the runway with another women harnessed upside down to their torso. The spectacle rather took away from the clothes but certainly ensured the show was memorable.

The outside of the Dior set was stunning and resembled a hillside of purple flowers. The clothes shown by Raf Simons were just as stunning featuring oversize sleeves, sloped shoulders and scallop edging. All of the Balmain signatures were on show in their spring/summer offering; body conscious silhouettes, sheer paneling and short hemlines. If this sounds good to you keep an eye out for the collaboration between the French house and H&M landing in Australia on November 5. Stunning pastel dresses and broderie anglaise formed key parts of the feminine and highly wearable collection at Chloe while Alexander Wang’s final collection for Balenciaga was a study in simplicity with all white looks reigning supreme.

The highlight of the Chalayan show saw models wearing especially formulated tissue coats step under a running shower that caused the coats to disintegrate revealing sparkling dresses beneath. Isabel Marant traded on her signature Parisian cool showing wearable pieces with a folk inspired feel while Japanese designer Rei Kawakubo continued to intrigue with her use of outsize sculptural shapes at Comme des Garcons. Roland Mouret celebrated the 10 year anniversary of his famous Galaxy dress, Sacai showed a fierce collection of masterful layering and metallic dresses and biker jackets were the star pieces at Louis Vuitton. Just when you think Mrs Prada can’t top her previous collection, she wowed again at Miu Miu using clashing print and texture to great effect.

There were so many incredible shows in Paris that it was extremely difficult for me to narrow down my coverage let alone choose just five highlights so I made a slight concession and chose six. The accompanying illustrations come courtesy of Emma O’Rourke, designer of FASHFEST favourite, The Label. 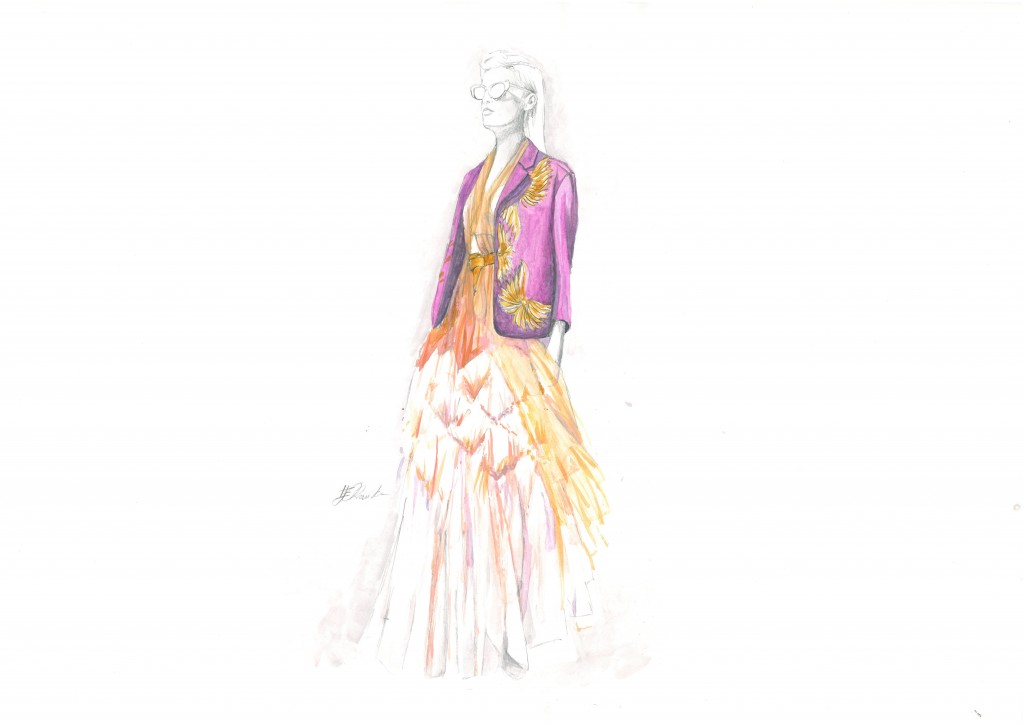 Two recent exhibitions, one in Paris and one in Antwerp, have celebrated the work of Van Noten, a designer who is often described as cerebral and eccentric. The clothes of this collection were simple but made exceptional by the Belgian designers deft use of colour, print and texture. Tailored trousers, jackets and full skirts were made up in opulent purple, fuschia, blue, and mint green with hints of gold. Lady-like hair, sunglasses, print stockings and gloves pulled each look together while still maintaining an element of the undone. The closing look featured above of a purple blazer embroidered with gold over a frothy white and gold dress was pure magic, perfectly balancing masculine and feminine. 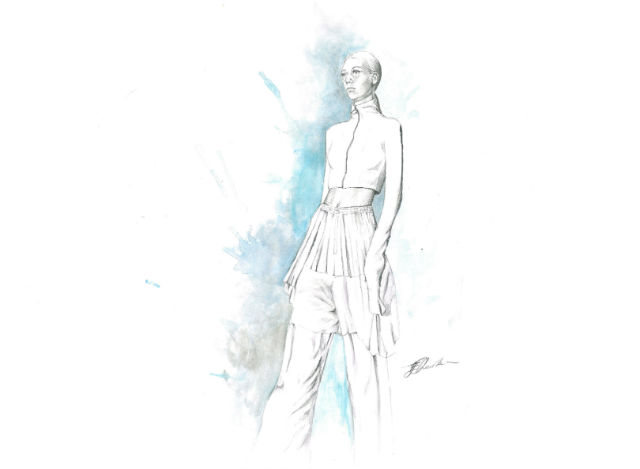 This collection marked the debut for designer Virgil Abloh who coincidentally celebrated his 35th birthday on the same day. Abloh, who has a Masters in Architecture, took the humble combination of jeans and a white t-shirt as a starting point before altering them with pleating, patchworking, cropping or lengthening. What resulted was a collection of achingly cool, wearable separates. Long denim skirts with pin-tuck pleating, denim jumpsuits with detailing at the ankles and long white sleeveless vests were particularly strong pieces. For the finale, a selection of models donned clear plastic jackets that were spray painted by a local graffiti artist. Australian style influencer Margaret Zhang was a fan as is our very own Emma O’Rourke so this is definitely a label to watch. 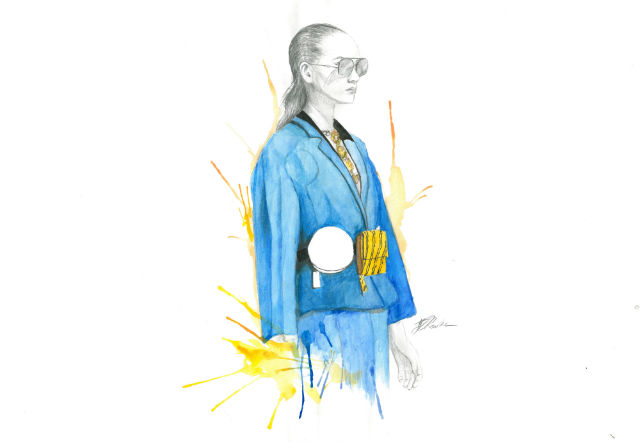 After the retirement of founder Kenzo Takada in 1999, the house of Kenzo floundered until 2011 when two Americans were appointed co-Creative Directors. Carol Lim and Humberto Leon are also the brains behind the hugely successful New York concept boutique Opening Cermony; success they have translated to Kenzo evidenced by skyrocketing sales since their appointment. Their Spring/Summer ‘16 collection featured clashing prints and bold colour across ruffled dresses, short skirts and Kimono jackets. Models wore over the knee boots with supersize lattice detailing, belt bags, and brown wet-look lipstick. A highlight of the show was the set itself with models moving down the runway on motorised platforms lined up like a battalion. 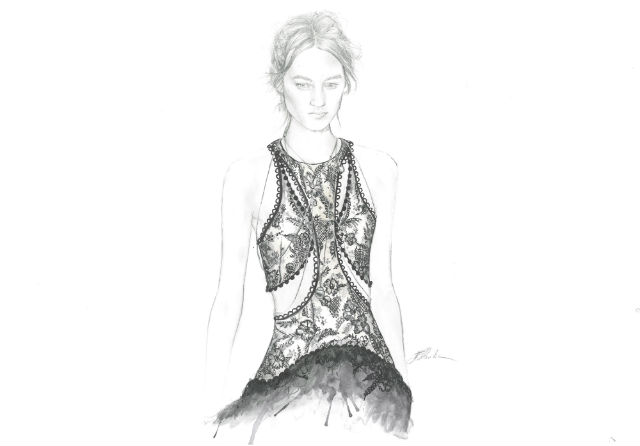 The collection presented by Sarah Burton, Creative Director for Alexander McQueen was met with a standing ovation. As well as being a tribute to craftsmanship, the collection was inspired by to the Huguenots; French migrants who crossed the English Chanel in the seventeenth century to eventually settle in the East End of London, the stomping grounds of the late Alexander McQueen. Couture level detailing was prominent with laser cut bodices, beaded flowers on denim and white papery fabric that was in fact treated leather all featured. Frills and flounces cascaded on dresses, skirts and bodices worn by models with messy braids and flushed cheeks. Burton perfectly mixed the darker references Lee McQueen was found of such as spine motifs and chains while bringing a sweetness and femininity to the collection. With a new McQueen store newly opened in Paris, the success of this collection will surely translate to sales in the fashion capital. 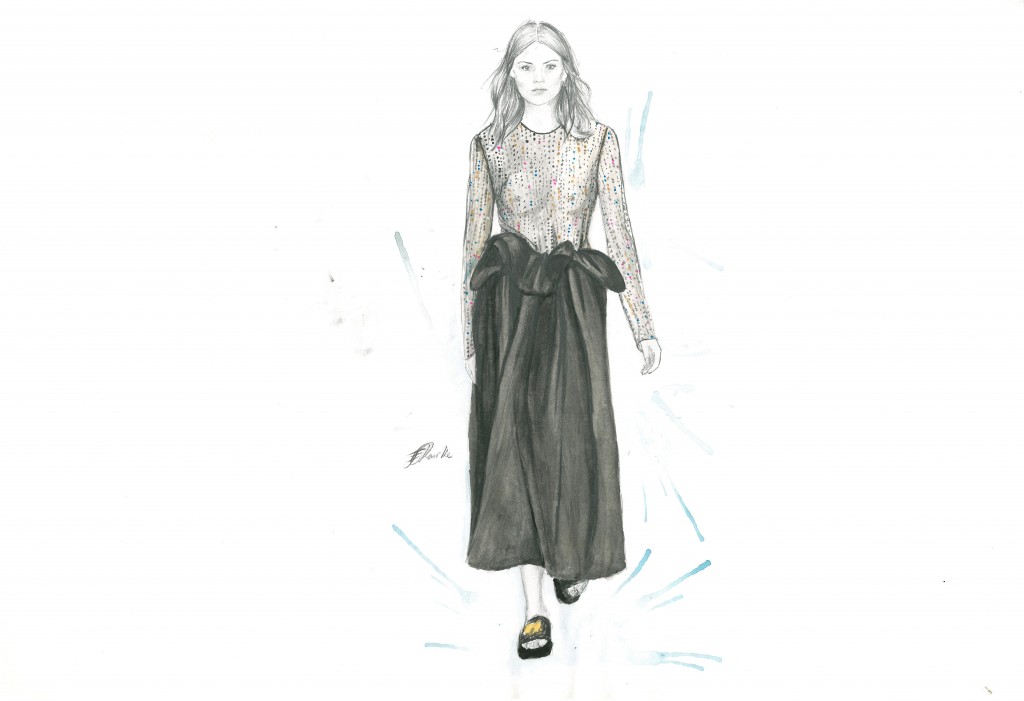 This season saw Australian designer Kym Ellery graduate to the official schedule of Paris Fashion Week, making her the third ever Australian accorded this honour (Colette Dinnigan and Martin Grant being the other two). Having shown four times as part of an emerging designers initiative, she has now made it to the big leagues. The collection built on the signatures Ellery has established, bell sleeves, relaxed tailoring and a restrained colour palette. Shift dresses were made up in fabric resembling liquid metal, delicately beaded tops were paired with voluminous skirts. Each look was anchored with chunky sandals and a bare face. The collection was a resounding success ensuring this Australian label is set for even bigger things. 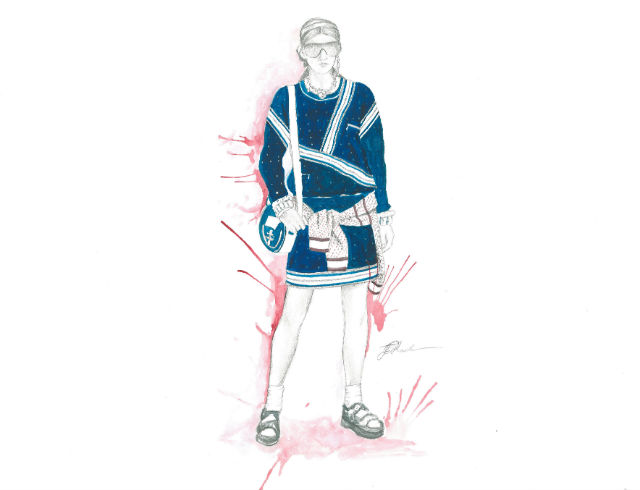 Each season Karl Lagerfeld takes his theme very seriously with no detail left beneath his notice. If it can be Chanelified it will be. For his Spring/Summer collection Lagerfeld embraced air travel, creating the almost functional Chanel Airlines. Attendants dressed in immaculate Chanel uniforms ushered models to their appropriate gates. Long skirts over pants, cropped sequin jackets, coat dresses and matching separates featured heavily as did the familiar Chanel staples; tweed, pearls and skirt suits. Accessories took the form of baseball caps, light-up chunky sandals, reflective aviators, jelly shoes and suitcases. Chanel favourite model turned actress Cara Delevingne took a turn on the runway accompanied by another Chanel regular (and Godson of Lagerfeld’s) 7-year-old Hudson Kroenig. The spectacle of a Chanel show ensures it won’t be forgotten any time soon and with footage clogging your social media feed for days you certainly won’t be able to forget it even if you want to.

Canberra designer Emma O’Rourke enjoyed dusting off her watercolours for our coverage of Paris Fashion Week. Emma is behind up and coming label The Label and recently had pieces of hers worn by Sarah J Kelly at New York Fashion Week. Keep your eye on Emma as she is set for big things.

Emma O’Rourke and THE LABEL at Vancouver Fashion Week