Warning: "continue" targeting switch is equivalent to "break". Did you mean to use "continue 2"? in /nfs/c05/h05/mnt/159427/domains/leidenmagazine.com.au/html/wp-content/plugins/essential-grid/includes/item-skin.class.php on line 1041
 Review: The Dressmaker | Leiden 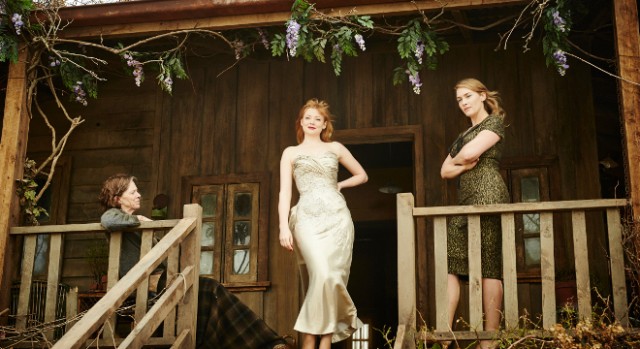 The star of new Australian film The Dressmaker isn’t Oscar winning actress Kate Winslet, nor is it Australian favourites Judy Davis and Hugo Weaving, or even homegrown Hollywood heartthrob Liam Hemsworth. The star of this dark comedy drama is in fact the clothes. And not just any clothes but jaw dropping French inspired couture pieces. Costume designers Marion Boyce, Sophie Theallet and Margot Wilson, have delivered all the magic you could expect for a film centred around the transformative power of fashion.

The story is set in 1950s Dungatar, a fictional small country town in Victoria. Replete with the larger than life caricatures we have become accustomed to in Australian cinema, Dungatar is a town full of prejudice. Myrtle, ‘call me Tilly’ Dunnage [Winslet], returns home to reconnect with her mother [Davis] and unravel the haunting memories of her childhood after working in Europe as a dressmaker for the likes of Madame Vionnet and Christobal Balenciaga. From the day she arrives, Tilly shakes up the dynamic of the town one couture outfit at a time.

While the plot is mostly driven by themes of revenge and reconciliation with the past, the film also examines the transformative power of the clothes we put on our backs. The way we dress can shape the way others see us and even the way we see ourselves. Early on in the film we are introduced to Gerty [Sarah Snook], a homely unappealing shop girl (dressed in frumpy, ill-fitting earthen colours) who cannot draw the eye of the handsome William [James Mackay] who has stolen her heart. However with the help of one expertly made gown from Tilly and a lesson in hair and makeup, Gertie emerges as the irresistible sex bomb ‘Trudy’ who effortlessly snares her man.

While this sort of romantic encounter is straight out of the 1950s, it does not dampen the universal power of a good dress and the confidence a perfect outfit can give. Despite Tilly transforming the women of Dungatar into veritable goddesses from the outside, not even the most stunning ensemble can change their true natures on the inside; they are just as cruel, prejudiced and mean spirited as before.

What I found most refreshing in this film was the celebration of the female form in its truest sense. Few and far between were the polished, gym honed celebrity bodies that dot majority of films produced today. Instead we were treated to an array of dare I say ‘normal’ body types. The feminine curves of Winslet and Snook in particular were made even more delectable in the wasp waisted, cleavage-enhancing cuts of the time. Typical bodies make the incredible transformations to each character all the more believable and relatable. After all, an actor with a perfect body looks good in almost anything, even the dowdy costumes that are meant to dress them down.

With more deaths than an episode of Midsomer Murders and lashings of black humour, the film is certainly not the chick flick some may have it pegged as. With a stellar cast, stunning cinematography and costumes that will make you want to trawl your local op shop, The Dressmaker is still going strong in cinemas even with the release of the latest installments of the Bond and Hunger Games franchises. This alone says something of the universal appeal of The Dressmaker and the strength and quality of Australian cinema.

Book Review: The Many Selves of Katherine North